Sophisticated weekend tea at The London 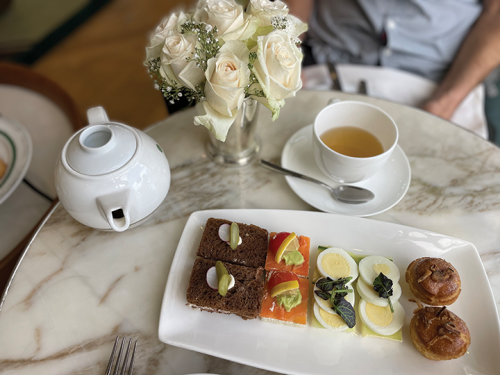 The weekend tea service at The Boxwood Restaurant is a sophisticated sensory experience. (photo by Jill Weinlein)

Weekends at the Boxwood Restaurant in The London West Hollywood at Beverly Hills hotel are the ultimate in sophistication, with a harpist gently playing for guests during the afternoon tea. Margaret Kelmm creates a clear, cascading environment with her music while pots of tea and trays of delectables are delivered to tables.

Executive Chef Anthony Keene has updated the hotel’s traditional afternoon tea service with creative finger sandwiches and an array of sweet treats for guests to enjoy amid elegant new decor.

Sitting at a window table for two, we had a choice of eight different Rare Tea Company of London teas to select. The menu offered descriptions of the flavor profile of each tea. I chose the traditional British Royal Airfare English Breakfast from the Makkaibari Estate in Darjeeling, India, and the Satemwa Estate in Malawi. Named after a Battle of Britain WW2 navigator, its more delicate in flavor than a modern breakfast tea and offered soft floral notes with a smooth malty finish.

My husband enjoyed a pot of Lemon Verbena from Provence, France. This tea was originally brought to Europe by the Spanish explorers in the 17th century. It’s a pure herb tea offering a mellow lemon flavor and pairs well with the four different tea sandwiches offered. Our favorite sandwich was the thinly sliced peppered roast beef on pumpernickel bread with a celery root slaw and tiny sliced gherkins. On top of the bread was another tiny gherkin and sliced radish.

Our second favorite sandwich was the roasted Jidori curry chicken with sliced red grapes sautéed onions on top of a flakey profiterole. The thinly sliced smoked salmon on brioche bread was enhanced with lemon zest and a dollop of whipped avocado. The fourth sandwich was an egg watercress and English cucumber that had a smear of soft, sweet-cream butter on one side of the thin brioche bread.

A three-tier tray arrived with two warm traditional scones and two others dotted with soft currants. Small jars of strawberry preserves, lemon curd and clotted cream were provided as well.

Another tier held an array of seasonal pastries and cakes including a beautiful Battenburg sponge cake with apricot jam between the layers. Each slice was covered in marzipan and had a distinctive two-by-two checkerboard pattern alternating pink and yellow colors.

This traditional Afternoon Tea is $84 per person. Add a glass of Moet & Chandon Champagne for $22. For those celebrating a birthday, shower or other special event, guests can order a special chocolate cake with white and chocolate ribbons, plus fresh berries on top for an additional $65. It is delivered to your table to be enjoyed at the tea and served in a box to bring the rest home.