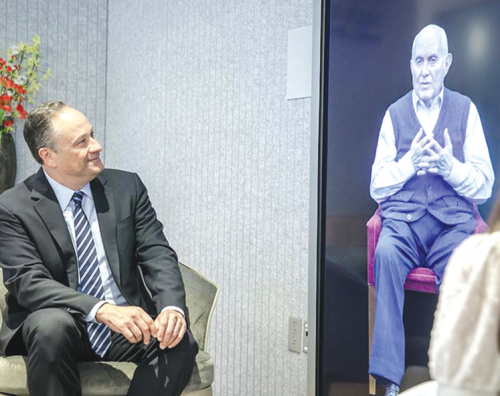 USC Shoah Foundation–the Institute for Visual History and Education welcomed Second Gentleman Douglas Emhoff on June 8 to the institute’s global head­quarters on the campus of the University of Southern California.

Emhoff’s visit included a conver­sation with the interactive biogra­phy of Holocaust survivor Pinchas Gutter, part of the “Dimensions in Testimony” program that enables visitors to ask questions to special­ly-recorded interactive testimonies of Holocaust survivors and hear real-time responses in lifelike con­versation. Minutes later, Emhoff spoke with Gutter live by videocon­ference from his home.

Emhoff, who is married to Vice President Kamala Harris, is a grad­uate of USC Gould School of Law. He is the first Jewish spouse to serve in the White House and the country’s first second gentleman. In his role, he has kept his Jewish her­itage and focus on Jewish issues at the forefront, holding a seder and hanging a mezuzah on the front door of the vice president’s resi­dence for the first time. Emhoff has also devoted time to engaging with Jewish and other faith-based indi­viduals and groups to work toward the administration’s goals of strengthening religious tolerance.

Emhoff met Kori Street, interim Finci Viterbi Executive Director of USC Shoah Foundation, in the George and Irina Schaeffer Hall for Genocide Studies, where they viewed a recorded testimony from Pilzno, Poland, the town where Emhoff’s family originated prior to immigrat­ing to the United States. Emhoff viewed the testimony of Helena Horowitz, a Holocaust survivor from Pilzno who concealed her Jewish identity as a child to save her life, and who ultimately settled in New Jersey after the Holocaust. Street also stressed USC Shoah Foundation’s mission and global work of counter­ing hate through testimony.

“We feel honored to have hosted the second gentleman and encour­aged by his words of support as we work to counter antisemitism and other forms of hatred around the world with testimony,” Street said.

“I love your message of unity,” Emhoff told Gutter. “We all need to stand together and stand united against this epidemic of hate.”

For information about “Dimensions in Testimony,” visit sfi.usc.edu/dit.

Keyboardist Sheléa to perform at The Wallis