Roxbury Drive home to be razed 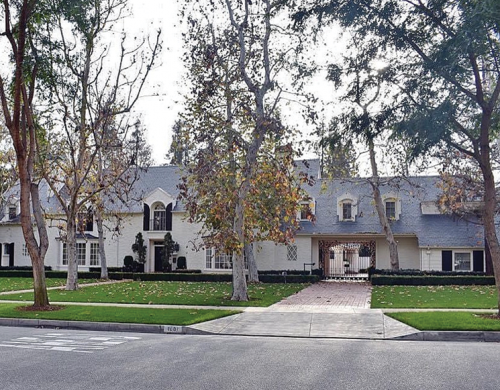 In a 4-1 decision, the Beverly Hills City Council voted against a last-ditch effort to save a home located at 1001 N. Roxbury Drive on June 21, paving the way for the beloved house to be demolished.

The structure has been the subject of contention for months in Beverly Hills, following the property’s purchase by StubHub founder Eric Baker, who initially received clearance to bulldoze the existing house and build a new home on the large lot on March 15, when the city issued him a certificate of ineligibility, meaning the city did not find that the home met requirements for cultural designation.

The decision was met with public outcry, as the 1941 regency revival house designed by Carlton L. Burgess is beloved within the community for its unique architectural style. At the April 12 Beverly Hills City Council meeting, it was determined there would be a review as to the property’s cultural status, and that Baker might have had his permission to demolish the house revoked.

Beverly Hills has a high standard for cultural designation status, which includes features in major architectural magazines, among other qualifiers. Baker, who was not present at the meeting, was represented by Benjamin Hamlin, of Latham and Watkins.

“The code standards have been fairly and evenly applied as the city’s staff determined the certificate tradition,” Hamlin said. “As you know, we believe the house has been deemed ineligible as a matter of law. However, we’re here tonight to lay out why we believe the council should affirm the certificate. We think the director of the city is an expert, and every other expert who has looked at this got it exactly right. The house is ineligible under the city standards.”

Hamlin went on to say that Mark Rios, who was behind a significant 2015 restoration of the home, agreed with the certificate of ineligibility. Hamlin also took issue with the architectural magazine examples that were issued.

“The house isn’t remarkable or exceptional,” Hamlin said. “In fact, there’s not a single article about the architecture of the house.”

Several speakers and community members represented both sides of the issue, including several notable current and former Beverly Hills residents.

Alison Martino, who operates Vintage Los Angeles, submitted a letter expressing her opposition to the property receiving a certificate of ineligibility, which is the official designation by the city of Beverly Hills that renders it possible to raze a structure.

“People are outraged that the demolition of this house would even be considered,” Martino said. “I run popular social media platforms about the history of Beverly Hills and surrounding areas. Many of my sentiments about the house have been published in various publications [and] have been seen and documented in print. The community that I run, which reaches over 1 million, are completely disturbed and distressed. Many of their letters have been sent as well. I grew up not far from Roxbury Drive. Since there are so many letters of outrage about this house possibly [being] destroyed, I feel the need to do the same. This is the most beloved house in Beverly Hills. It’s devastating to think we might lose a home this beautiful. It’s just astonishing that this great home would not be considered ‘historic.’

“We need more appreciation of the finer things. Once the generation that remembers this type of architecture and appreciates it passes away, more will be destroyed – very sad to call this progress. Roxbury Drive will never recover from the loss of this house, nor will the entire city. Please do the right thing,” Martino said.

Roxbury Drive is one of the more storied streets in the city, known historically for being the street stars like Lucille Ball, James Stewart, Peter Falk, Jack Benny, Diane Keaton and Madonna called home. In recent decades, many of its original homes were either destroyed or significantly altered, with some residents expressing concern that the spirit of the neighborhood has been permanently damaged.

Keaton, who also serves as a board member of the Los Angeles Conservancy, was one of several community members who submitted statements in favor of the saving 1001 N. Roxbury Drive.

“I have previously owned two homes on Roxbury Drive,” Keaton wrote. “I simply love the history of the area let alone the street. Now, I am pleading with you, we cannot let [the] 1001 North Roxbury Drive home be yet another catastrophe to our city. This charming and historic home needs to be preserved for us and future generations.

“I’ve toured this home in the past and admired and remained in awe of its beauty, and it would be a tragedy for this to be a statistic of demolition that is not only unnecessary but also devastating.”

“By any standard, it is the quintessential Beverly Hills mansion, one that has added grace and character to the star-studded neighborhood since the early 1940s,” Bruckheimer wrote. “The new owner, however, hates everything about the place but the ground it was built on. Instead of searching for land to develop or the perfect house to restore, the remedy – an all too frequent one – was to set his sights on 1001 N. Roxbury Drive, purchase it for a whopping sum and destroy it. This is absolutely insane. Just imagine wrecking balls and bulldozers obliterating the entire corner of Roxbury and Lexington, and the term ‘tone deaf’ takes on new meaning. Losing yet another architectural treasure would be unthinkable and heartbreaking under any circumstances.  But it is even more shocking during this era when our environment has taken center stage and efforts to conserve, preserve and recycle are critical to our well-being.”

Council members, however, ultimately decided they could not rule on public sentiment alone. In particular, the council members noted that none of the articles submitted for the home’s historical consideration mentioned the name of the architect.

“Yes, I love this home,” Mayor Lili Bosse said. “I live a few blocks away, and I walked by it every day. But what my job is … I have to make hard decisions. Sometimes in our lives we have to make hard decisions based on what we are supposed to be doing, and for me that is being a good council person. Because you can talk about the fact that they’re going to make a decision not for your friend, not because of the celebrity letter. They’re making it because of the wisdom that is in front of them.”

Councilman John Mirisch was the lone “nay” vote in issuing the certificate of ineligibility.

“I think it is OK to do this through the dual lenses of emotion and objectivity,” Mirisch said. “Because I think in this case, they go hand in hand, and I think this is ultimately about our home. It is often said home is a sacred place, and it’s not just the individual house that we live in. I think this is a sad day for Beverly Hills. I fear that today will go down in history as a moment when we … failed our children and our grandchildren but also our parents and grandparents. From my perspective, 1001 Roxbury is indeed a remarkable, superior work.”

“Like City Councilmember Mirisch perfectly stated, ‘Once it’s gone, it’s gone forever.’ He was the only City Council member who voted against demolition. Now our only hope is that the current owner wakes up like Ebeneezer Scrooge and has a change of heart,” Martino said.

That is a beautiful home. I’m so sad to see it torn down.

Why demolish! American visitors to Great Britain love the historical buildings both small and large , This looks like an iconic building from the forties , you have very little history in from what l’ve seen around
Hollywood , however money seems to be the upper hand , sad , very sad .

Too bad beautiful house. If houses could talk……

I am so sad
I love Roxbury!
The neighborhood is beautiful
I used to see Jimmy Stewart painting on Roxbury, I heard that Lucille Ball lived on Roxbury
The stories go on
as an aside I raised my babies at Roxbury Park