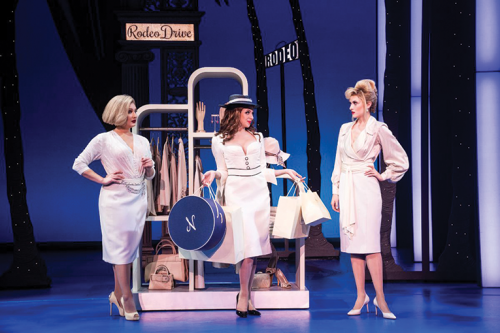 Kelsee Sweigard, Olivia Valli and Becca Suskaue appear in “Pretty Woman: The Musical,” which runs through July 3 at the Dolby Theatre. (photo by Matthew Murphy for MurphyMade)

Olivia Valli’s grandfather Frankie Valli was in attendance at the June 17 Dolby Theater premiere of “Pretty Woman: The Musical.” Olivia Valli is playing the titular character, also known as Vivian, who is both the subject of the classic Roy Orbison tune and the focus of the Cinderella story about a sex worker who falls for a wealthy businessman at the Beverly Wilshire Hotel. Right off the bat, I want to say that vocal talent runs strong in the Valli family. Olivia is a star and more than holds her own against her leading man, the veteran “Rent” alumnus and Tony-nominated Adam Pascal.

Chock-full of Los Angeles locales, the musical is adapted from the Garry Marshall-directed flick, which was a huge hit upon its release in 1990. A star-maker for Julia Roberts, and a resurgence for her co-star Richard Gere, the movie was one of the rare romantic comedies to garner attention come awards season, including an Oscar nomination for Roberts. In spite of this, the film holds a lukewarm 65% on Rotten Tomatoes, with most criticism levied at its simplistic take on gender politics.

The story, after all, is about a handsome rich guy who saves an undereducated girl from a life on the streets. There’s a capitalistic streak in “Pretty Woman,” with plenty of the story’s focus going toward how the right clothes, jewelry and refineries trasnform Roberts into the proper catch for Gere.

The musical adaptation came to Broadway in 2018, a labor of many years for all involved, including original director Marshall, who died in 2016 but still receives credit for the musical’s book. That book, by the way, is incredibly faithful to the movie. Fans of the film, and there are legions, will get a “wink, wink, nudge, nudge” moment in nearly every scene, as callbacks to iconic pop culture moments range from a recreation of the famously-improvised gift-box slam (if you know, you know) and lines like “Big mistake. Big. Huge,” repeated verbatim.

It’s not original. It doesn’t reinvent the wheel, nor does it have anything new to say about the material. It doesn’t expand upon the darker story elements (like the drug-infused partying of Vivian’s roommate, who’s played by the scene-stealing Jessica Crouch). It kind of just … plays the hits.

Except, of course, for the actual hits.

The “Pretty Woman” film, after all, is also well-known for its soundtrack, certified three-times Platinum, and brimming with tunes from David Bowie, Natalie Cole and Red Hot Chili Peppers. When the Broadway show premiered in 2018, the Orbison title track wasn’t even included in the score, though now, in addition to its guitar riff occasionally being sampled in other songs, it appears as an encore singalong.

The songs, which are rock-infused, do their job. It’s a pleasant score. It’s a pleasant time at the theater, actually. It’s really hard to find anything objectionable to say about it at all. The acting is great. The production is solid. Thanks to that “Oh, Pretty Woman” encore at the end, you’ll be tapping your toes down the aisle as you exit.

But it’s also easy to see why the Tony nominations didn’t come upon its premiere a few years ago. It’s another movie-made-musical. It’s fun. As a film fan, I enjoy the diversion. It makes me think “what if?” about other romantic romps from the period. “When Harry Met Sally” would be a fun adaptation … I think. Has it been done? Will I regret asking for it? Can they use “It Had to Be You?” Would Harry Connick Jr. star?

As for the previously-mentioned, uniformly-stellar cast, the most inventive element of the stage version is taking the hotel manager character from the film and making him into a multi-character narrator for the show. Kyle Taylor Parker is brilliant and holds the entire show together. He has chemistry with everything and everyone, and I could watch an entire show about any of the multiple “Welcome to Hollywood” people he plays. He’s the audience’s insight to the tale, and his presentation is what makes it all work in the end. The rest of the performers get their star moments with big notes and applause and sell them.

It’s a crowd-pleaser that is … dare I say … good enough. And there’s nothing wrong with being good, not great.

Frankie Valli likely walked away from “Pretty Woman” with a smile on his face. While not the unqualified triumph of “Jersey Boys,” which used his music and his story, it is certainly the first of many times to come that we’ll hear about his incredibly talented granddaughter.

“Pretty Woman” runs through July 3 at the Dolby Theatre, which is located at 6801 Hollywood Blvd. Tickets start at $39 and can be purchased at the theatre box office, by calling (800)982-2787 or visiting broadwayinhollywood.com or ticketmaster.com.