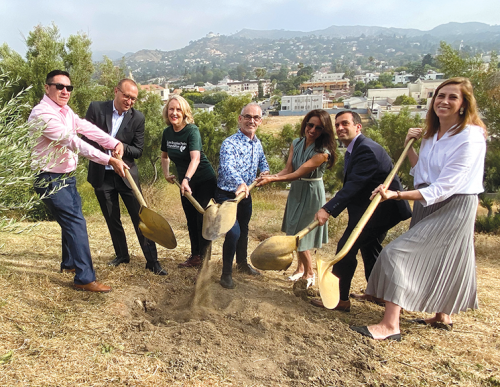 The saplings were added to an existing grove of olive trees on a hill facing the 4800 block of Hollywood Boulevard, along a driveway leading up to the hilltop Hollyhock House. Some mature trees in the grove date to the 1890s when large portions of Los Angeles remained undeveloped and were used for agriculture.

The trees were planted through a partnership between the Barnsdall Art Park Foundation, the Los Angeles Parks Foundation, Councilman Mitch O’Farrell’s Office and the Los Angeles departments of Recreation and Parks and Cultural Affairs. The project is part of a larger plan to revitalize the historic olive grove and other spaces around the historic site.

“Barnsdall Art Park is a unique and priceless gem in the city of Los Angeles, and this olive grove initiative is yet another reminder as to why,” said O’Farrell, 13th District. “Preserving the existing trees and propagating new, healthy olive trees into the campus’ landscape is an essential step in preserving this historically significant grove that is an essential contributor to this cultural resource we all cherish, Barnsdall Art Park, and UNESCO World Heritage Site Hollyhock House.”

“We launched an initiative called the L.A. Park Forest program to plant much needed trees in parks throughout the city of Los Angeles,” said Carolyn Ramsay, executive director of Los Angeles Parks Foundation. “This is our 11th park forest. We’re planting 40 Wilsonii olive trees to fill in gaps in the original olive grove that has been here since the 1890s. This is a spectacular project for us, for the people of Los Angeles, and it’s going to provide so many benefits to Hollywood. We’re right in the middle of a very dense urban area, and these trees are going to provide benefits for generations to come.”

Some of the trees were donated in memory of loved ones, including Harriet Miller, who worked in the Barnsdall Park Junior Art Center. Her grandson, Nathan Miller, CEO of Miller Ink, said she would have been proud of the improvements to the park.

“My grandmother, Harriet Miller, would have been so moved. It’s such a meaningful day for our family that we are able to donate this tree,” Miller said. “She passed last year. She was director of the Junior Art Center here for more than 20 years and she loved this place. She loved this city. She understood and dedicated her life to the idea that young people should have access to really excellent, wonderful art experiences, and poured so much love into this place to make sure that people from throughout the city had access to come here and experience that.”

Barnsdall Art Park is located at 4800 Hollywood Blvd., just west of Vermont Avenue. In addition to Hollyhock House, it includes an art center and theater managed by the city’s Department of Cultural Affairs. Wright designed Hollyhock House, built between 1919-21, for oil heiress Aline Barnsdall, who donated the property and structures to the city in 1927 for use as a public park and art center.

In 2019, Hollyhock House was added to UNESCO’s list of World Heritage Sites, along with seven other buildings designed by Wright throughout the United States. The historic Hollyhock House is open for public tours.

The city of Los Angeles is currently restoring a guest house designed by Wright in Barnsdall Art Park known as Residence A. The guest house’s exterior renovation was completed last December, and interior work is currently ongoing through 2024. The guest house will be reopened to the public after the work is finished, O’Farrell said. He also stressed the importance of the city’s urban forest and encouraged more tree planting projects.

“This reminds me of the Greek proverb that a society grows great when old people – and I’m not saying any of us are old – plant trees whose shade they know they shall never see,” he said. “So let’s plant lots and lots of trees … not just here, but all over the city. That will be a legacy worth leaving for all of us.”