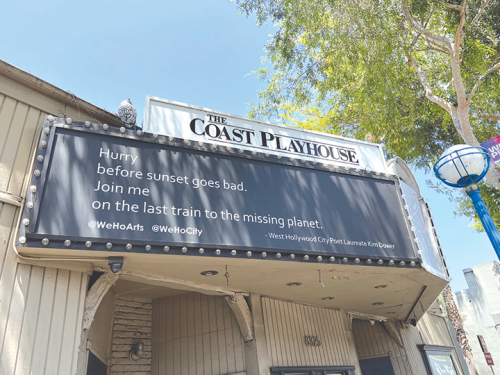 The Coast Playhouse will soon be demolished and rebuilt as a new theater space. (photo by Patrick Toth)

The Coast Playhouse, located at 8325 Santa Monica Blvd., was acquired by the city of West Hollywood in 2017. Constructed in 1925, the 2,790 square foot building was most recently used to host theatrical plays and readings under the banner of the Equity Waiver Theater. It has also been used as a film house.

Now, the city has approved a measure that will demolish the building and replace it with a new theater.

A cultural survey in 2016 determined that the building was not historically significant. At the June 6 West Hollywood City Council meeting, city staff revealed a rehabilitation study found the building to be in poor condition.

“A number of aspects don’t meet code,” urban design and architecture studio manager Ric Abramson said. “There’s some environmental issues, some areas where it would be very costly to rehab it, and any sort of rehabilitation because of the improvements that would be necessitated would reduce the capacity of the current seating of 99 seats down to 70.”

The staff recommended to the City Council that the existing structure should be demolished and replaced with something new.

“To build a new facility would be substantially similar to what it would take to rehab the current facility,” Abramson said.

The cost to rehabilitate the building would be approximately $4.78 million. Meanwhile, new construction would be capped at $6.5 million.

The commission offered three potential alternatives – labeled A, B and C by city staff – on how to move forward with a new design, two of which would have taken the project to an entirely new steering committee composed of members of various commissions, residents and construction/design professionals. The council members agreed that the project should, instead, be fast tracked, choosing to adopt the alternative C suggestion, which will establish a city manager advisory group.

“I think all of staff feels very strongly that should the council desire to go forward, we would love to turn this around and be back to the council with a recommendation on a team within 90 days,” Abramson said. “We should be able to work within limits to deliver a new facility.”

“I’m comfortable with alternative C,” Councilman John Erickson said. “I think the public has been waiting for this space for quite some time. I want to give this back to the community as soon as possible.”

“I think time is of the essence. People have been waiting,” Councilwoman Lindsey Horvath said. “We don’t want this to be something that people can’t use. The reason we took it over is so people could use it.”

There were also three potential designs that were presented at the council meeting, though Councilman John D’Amico noted that it was unlikely the final product would look like any of the renderings presented. For this reason, he thought it was important that a smaller group discuss what the project will look like, followed by input from community members, before a final design is chosen.

The council agreed that a planning commission member should be on the city manager advisory group. This was added to the motion before it received unanimous approval.

With the city of West Hollywood owning the balance of the block, including City Hall across the street, Abramson said that it would be part of a larger development over time.

“The new designs for the Coast Playhouse affirm West Hollywood’s longstanding commitment to not only the arts but also investing in returning these spaces to the community better than they were when we purchased them,” Erickson said. “I’m excited for the vibrancy the playhouse will bring to the city and the future it represents for the arts in West Hollywood.”