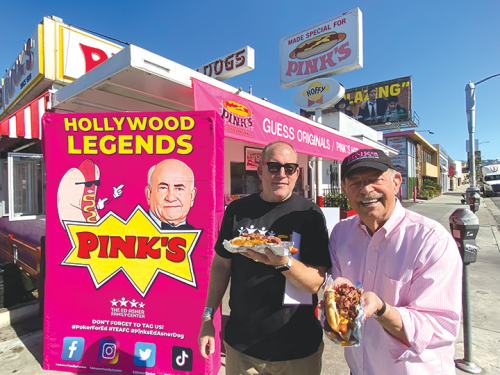 Actor Ed Asner was beloved by fans for his memorable roles on “The Mary Tyler Moore Show,” “Lou Grant,” ”Roots” and “Rich Man, Poor Man,” earning him seven Emmy Awards during a long and distinguished career.

Many people may not know that Asner, who died at age 91 on Aug. 29, 2021, loved hot dogs and was a frequent customer at Pink’s, his son Matt Asner said. On June 20, Pink’s Hot Dogs debuted the new Ed Asner Kansas City Pastrami Chili Dog, with a portion of sales being donated to the Ed Asner Family Center, which supports families with special needs children. The hot dog is $7.35 and is made with a 9-inch all-beef stretch dog topped with chili, pastrami, Swiss cheese and a swizzle of mustard – just the way Asner liked it, his son said.

“My dad’s favorite thing in the world was hot dogs,” Matt Asner added. “He loved hot dogs, and for this to happen as a tribute to him and the work we do at the center, I think is spectacular. We’re really excited to be a part of it.”

Richard Pink, who operates the stand near La Brea and Melrose avenues with his wife Gloria and sister Beverly Pink-Wolfe, said the idea for the new hot dog stemmed from the Pink family’s charitable work. Pink’s catered an Ed Asner Family Center benefit on June 18, and Pink decided to further give back and pay tribute to the actor by permanently adding a hot dog in his name to the menu.

“My heart just skipped a beat hearing about how important and how critical this type of charity is to helping children with special needs,” Pink said. “We not only catered for a big fundraiser that Matt put together, but also now introduced the Ed Asner Kansas City Pastrami Chili Dog that will be on our menu. We’re going to donate 15% of the gross proceeds to the Ed Asner Family Center.”

The Ed Asner Family Center, which is located in Reseda, was founded four years ago by Matt Asner and his wife Navah. The organization supports children with special needs through classes and programs that enrich their lives and build confidence and self-respect. For information, visit edasnerfamilycenter.org.

“When you’d get Ed Asner in line here, everybody lined up to get his autograph,” Pink added. “He was an icon for his work in television and movies.”

Matt Asner said his father, who was originally from Kansas City, would have loved the new hot dog. It being unveiled on the day after Father’s Day was also special, he said.

“Every chance he had he’d be here (at Pink’s). I remember being here with him, it was a while back, but I remember being with him and we sat on the back patio,” Asner added. “And what better hot dog is there than Pink’s? Seriously.”