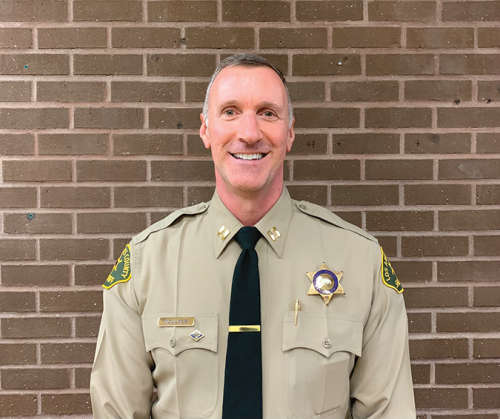 Capt. Bill Moulder said he plans to work closely with the city to address crime and quality of life issues affecting the community. (photo courtesy of the city of West Hollywood)

Capt. Bill Moulder has been appointed to lead the West Hollywood Sheriff’s Station following a selection process that began in April when former station Capt. Edward Ramirez was promoted to the rank of commander.

Moulder is a 31-year veteran of the Los Angeles County Sheriff’s Department who has spent years working in West Hollywood. From 2002-06, he served at the station as a deputy and detective, and since 2018, has served in West Hollywood as a lieutenant. Other assignments included stints at the Palmdale, Lancaster and Santa Clarita sheriff’s stations, as well as the Sheriff’s Department’s Legislative Unit and the Medical Services and Risk Management bureaus. Moulder had been serving as acting captain of the West Hollywood Sheriff’s Station since Ramirez’s promotion in April.

“It’s an honor and a privilege to be able to serve the city of West Hollywood,” Moulder said. “This is a wonderful community that I love very much. What makes West Hollywood special, in terms of the sheriff’s station, is the wonderful deputies we have here. I am looking forward to working with city staff and our City Council to make it a better and safer place.”

West Hollywood Mayor Lauren Meister said she was pleased Moulder was selected for the new assignment. The selection process involved eligible members of the department applying for the position, interviewing and being vetted by the City Council and city staff. Sheriff Alex Villanueva makes the final decision on promotions and assignments.

“I want to congratulate Bill Moulder on his appointment to lead the West Hollywood Sheriff’s Station as its new captain,” Meister said. “For nearly four years, he has served our community skillfully as the station lieutenant and his promotion to captain is great news. Public safety is our single-most important concern in West Hollywood and Capt. Moulder is a law enforcement veteran who is highly respected by our community. He knows West Hollywood and its unique challenges, and I look forward to continuing our work with him in his new leadership role at the station.”

Over the past two years, concerns about law enforcement’s approach in West Hollywood have surfaced. The city hired more unarmed private security ambassadors and is considering whether less funding should go to its contract with the sheriff’s department. Moulder said there are approximately 60 deputies currently assigned to the station, not counting detectives and administrative staff, and they provide a valuable service protecting West Hollywood’s residents and visitors.

“In terms of law enforcement, I think having more deputy sheriffs out on the streets serves as a deterrent to crime and provides a safe environment for our community,” he added.

Moulder said he plans to continue efforts to prevent property offenses and assaults, which are the most common crimes occurring in the city.

“Because the things driving our numbers are theft-type crimes, that has and will continue to be our biggest focus. Particularly crimes occurring in our nightlife establishments, like pickpocketing, that are occurring inside the establishments and outside on the streets,” Moulder said. “Street robberies will be a focus as well. Violent crime is always a concern, and we will work to address that.”

Moulder said statistics show nearly one-third of street robberies involve people who are unhoused, so he plans to increase outreach work, in collaboration with the city, to address the issue.

“It’s important to do outreach, and I think we can really make a difference in preventing crime,” he said. “I have had a lot of contact with the community, our city itself and the City Council, and have developed a great working relationship. I plan to continue that work. It’s an honor to serve in this capacity.”