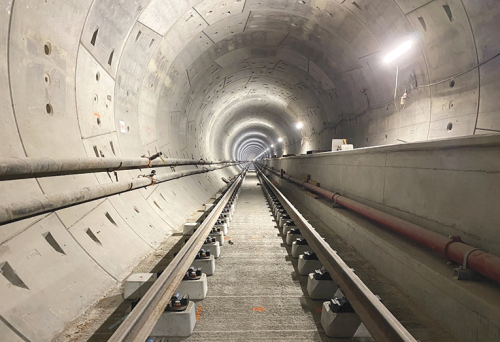 Crews are installing tracks in the subway tunnels for the Purple Line Extension project. (photo courtesy of Metro)

Construction is occurring at many locations along the tunnel alignment in the Miracle Mile, Beverly Hills, Century City and Westwood. Crews are installing track in sections of the tunnels. Once the rail is installed, concrete is poured along the bottom of the passage to set concrete support blocks. Ultrasonic waves are sent through the tracks to ensure there are no flaws in the rails.

Crews are also working at the future Wilshire/Fairfax subway station. The work is occurring underground on appendage structures adjacent to the main station and above ground at a K-rail work zone near the southwest corner of Wilshire Boulevard and Fairfax Avenue. Wilshire Boulevard will be reduced to two lanes in each direction between San Diego Way and Spaulding Avenue.

Eastbound Wilshire Boulevard may also be closed on weekends between Wilshire/La Cienega and Wilshire/Fairfax. Motorists will be detoured onto southbound La Cienega Boulevard and eastbound on Olympic Boulevard to avoid the closure. The directional closures will be implemented from 9 p.m. on Friday through 6 a.m. on Monday.

Parking replacement is available from 10 a.m.-3 p.m. at 8447 Wilshire Blvd. and 8350 Wilshire Blvd. The spaces replace metered parking on Wilshire Boulevard between La Cienega and San Vicente boulevards. The first hour of parking is free by mentioning Metro when entering the structure.

Ground improvement work in preparation for the construction of cross passage tunnels has begun near Wilshire/Rodeo. Fourteen locations along the tunnel alignment in the area will require lane and sidewalk closures. Notices detailing closures at each location will be provided prior to the start of work. The lane closures are anticipated on Wilshire Boulevard between El Camino and Crescent drives.

Through June 17, crews will be installing instrumentation in Westwood in preparation for subway construction. Work zones will require temporary lane reductions and intermittent parking restrictions. The work will occur Monday through Friday, from 9 a.m.-3:30 p.m. near Ashton and Westholme avenues, and Kinnard and Pandora avenues.