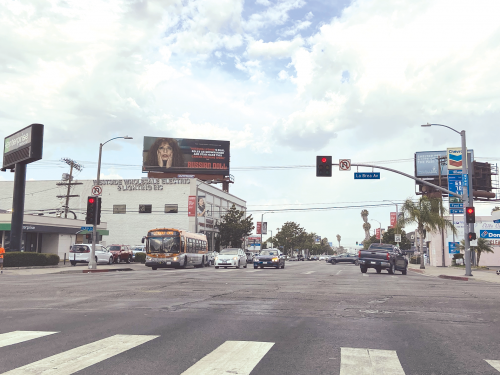 Police received a call about a man with a gun threatening people near Beverly Boulevard and La Brea Avenue. (photo by Edwin Folven)

Los Angeles Police Department officers shot and wounded a male suspect on June 17 who they said fired a gun at them near Beverly Boulevard and La Brea Avenue.

The suspect, who was not identified, was treated at a hospital and arrested for assault with a deadly weapon on a peace officer. Formal charges are pending.

Sgt. Frank Preciado said officers from the LAPD’s Hollywood Division received calls around 9:30 a.m. about a male suspect in his 30s with a gun threatening construction workers near the intersection. Officers arrived and located the alleged suspect, who fled on foot.

“They attempted to contact him and he turned around and fired at officers, and an officer-involved shooting occurred,” Preciado added. “He ran westbound on Beverly and officers temporarily lost sight of him. They detained him at Beverly and Detroit. The suspect was struck by gunfire and had non life-threatening injuries. A firearm was recovered at the scene.”

No officers or civilians were injured. Preciado did not know the motive for the crime.

“He was pointing a gun at construction workers,” Preciado added. “It’s unknown whether the suspect had a dispute or if he was mentally ill. It’s under investigation.”

The case is being investigated by the LAPD’s Force Investigation Division, which is standard protocol for all officer-involved shootings. Beverly Boulevard remained closed for hours on June 17 between Sycamore Avenue and Detroit Street, and La Brea Avenue was closed from Rosewood Avenue to First Street.

Firefighters snuff out blaze before it spreads in Hollywood Hills