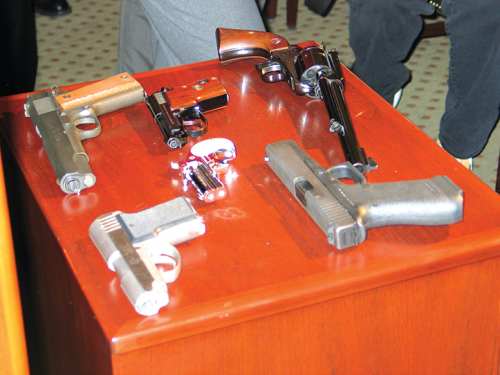 On June 23, the United States Supreme Court issued a ruling that overturned a centuries-old law in New York that limited the right to carry concealed guns. This decision could affect laws nationwide, including in Los Angeles.

“I’ve been devoted to keeping communities safe from gun violence throughout my career.  More guns in more public spaces will make us all less safe,” Los Angeles City Attorney Mike Feuer said. “Laws limiting the concealed carrying of firearms save lives. I will fight like hell to ensure L.A. continues to place lawful limits on concealed weapons in our city.”

“[Los Angeles] gun safety legislation is really strong, as long as it doesn’t get struck down by the Supreme Court based on lawsuits,” O’Farrell said. “The irony to me after Orlando and the Pulse nightclub shooting, we took on the NRA. They had to shut down their TV station. There was widespread corruption with NRA leadership, and then they filed for bankruptcy. So, it’s ironic to me that a leading gun lobby at an all-time low still has all of this power and sway. I think that just means that the psychology at play here is that not enough leaders have the resolve to just keep up the fight and stay psychologically strong when you have an advantage over a lobby that is at its weakest. Instead of leaning in and being more forceful and stronger with gun safety legislation, you cave.”

Following the June 2016 Pulse shooting, O’Farrell and other Los Angeles leaders passed legislation that required companies doing business with the city to disclose ties to the NRA. That city law was later ruled unconstitutional.

The 6-3 U.S. Supreme Court decision comes on the heels of the landmark passage of the Bipartisan Safer Communities Act, which, when signed by President Joe Biden on June 25, became the first major, national gun control legislation enacted in nearly 30 years. Schiff said that he did not think this new federal law would be struck down, but local gun safety measures could be called into question.

“States like California that have laws in place that require there to be a showing to law enforcement before getting a license to carry, would likely be struck down under this court decision,” U.S. Rep. Adam Schiff (D-Burbank) said. “Those laws are going to need to be … rewritten so to make them more narrowly tailored to avoid the court ruling. And California is already preparing to do that.”

This belief was echoed in a statement from Sens. Dianne Feinstein and Alex Padilla.

“I would fully expect that a requirement that people pass background checks, that they take safety courses, that they not have different kinds of convictions that would disqualify them, all of those things, I think would not run afoul of this court decision. But that doesn’t mean it won’t be challenged anyway,” Schiff said.

O’Farrell said that, because of the way in which the current Supreme Court seems to read the Second Amendment, drastic measures are necessary to handle America’s gun problem.

“I think we need a new amendment,” O’Farrell said. “That’s what it’s going to take. I think it’s going to be up to the American people, if we can muster the character collectively across the United States and pass some additional amendments that make our country more livable … so we’re not beholden to a Supreme Court that was stacked by a criminal president.”

While Schiff said a constitutional amendment is unlikely, he expressed hope that there may be other measures lawmakers can take.

“There’s a lot that we can do that would be very meaningful, like an assault weapons ban, like a ban on extended ammunition clips, that I would hope would survive even a right-wing, extreme court like this one. So, some of the most important steps that we can take would still comply with this court decision. And a couple of the conservative justices expressed, even in that opinion, a recognition that states can pass, and Congress can pass, certain laws that condition access to firearms,” Schiff said. “I think we continue to, in states like California, pass common sense gun safety measures. We’ll continue to do it in Congress when we can get a vote to get them through, knowing that they may be challenged, but knowing that we will hopefully be successful in those challenges.”