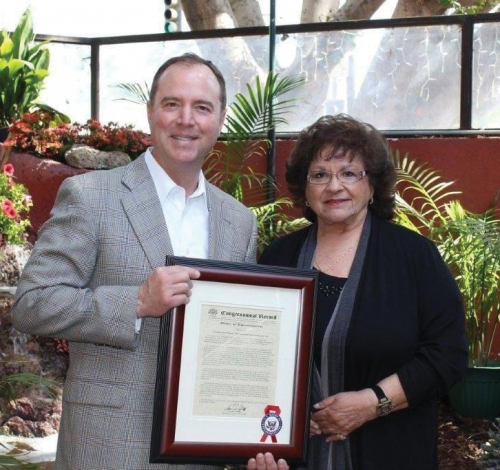 Ruth Williams was honored as a Woman of the Year for the California 28th District by U.S. Rep. Adam Schiff (D-Burbank) in 2014. (photo courtesy of Ruth Forster Williams’ Facebook page)

Ruth Hanna Williams was one of those rare West Hollywood residents whose impact was so great, the city lowered its flags to half-staff in her honor after she passed away of complications from a stroke on June 17. Born March 15, 1938, Williams’ 84 years made an indelible impact on the city she called home.

“Ruth’s dedication to West Hollywood was unparalleled. She always went out of her way to help and support those most in need,” former West Hollywood Councilman John Heilman said. “She embraced and mentored so many people in our community. We’ve lost part of the heart and soul of our city.”

“Ruth Williams was one of the city founders who loved West Hollywood,” former Councilman John Duran said. “She was a fierce defender of public safety and our sheriff’s department. She was also a warrior for the neglected Eastside of WeHo where she lived. Ruth helped guide the way we restored the eastside of town between La Brea and Fairfax.”

A graduate of Fairfax High School, Williams worked in the music and television industry at Columbia Records, RCA Records, Motown Records and KTLA. She later was the director of advocacy at the National Council for Jewish Women, Los Angeles.

Williams was involved with West Hollywood from its incorporation as a city the 1984. She helped advocate for the city’s rent control and neighborhood watch measures. She ran for city council in 2001. Though Duran narrowly edged her out in an intense race for the seat, he was impressed enough by her that he wanted to appoint her to a city commission.

“I asked her if she wanted to be my appointee on any city commission,” Duran said. “She was gracious and said yes. She wanted public safety.”

Williams served on the city’s Public Safety Commission for 16 years. She previously worked with the grassroots group Save Our Sheriffs, helping to reform the city’s sheriff’s station in the 1990s.

“The sheriffs stopped firing openly gay deputies like the late Bruce Boland and agreed to recruit LGBT deputies and employees,” Duran said. “They also agreed to start marching in the annual gay pride parades. This was a major step forward for them.”

“I met Ruth Williams over 20 years ago when I got involved with my neighborhood’s resident’s association and then started attending Public Safety Commission meetings,” Mayor Lauren Meister said. “Ruth and I then served together on the commission and I appreciated her willingness to be a mentor, as I had not been on a city commission previously.”

“Ruth helped create our community as a board member, commissioner, Democratic leader, woman of faith and public servant who dedicated her life to helping others,” Councilwoman Lindsey Horvath said. “I remember meeting her when she was director of advocacy at NCJW, and I was president of Hollywood NOW. She gave us space, she connected us to organizations, she took us under her wing and she helped launch our work.”

Her community efforts were so widely recognized that in 2014, Williams was honored by U.S. Rep. Adam Schiff (D-Burbank) as a “Woman of the Year” for the 28th Congressional District.

“If I had to describe Ruth in one sentence, I would say that Ruth was a dedicated neighborhood advocate, who truly loved this city,” Meister said.

Williams is survived by her sons Steven and Richard Neubauer, and Michael Forster, and her grandchildren Jonathan and Lauren Neubauer, and Jacob Forster. Her funeral will be held at Mount Sinai Memorial Park on July 1 at 10 a.m., with burial services to be held immediately after. In lieu of flowers, the family is asking for donations to St. Jude’s Children’s Hospital.

“Her example has inspired countless people, including me, to get more involved in our community. She was a friend and mentor to many, and she will live in the hearts of all who knew her. WeHo wouldn’t be what it is today without her. I will miss her forever,” Horvath said.

Roxbury Drive home to be razed