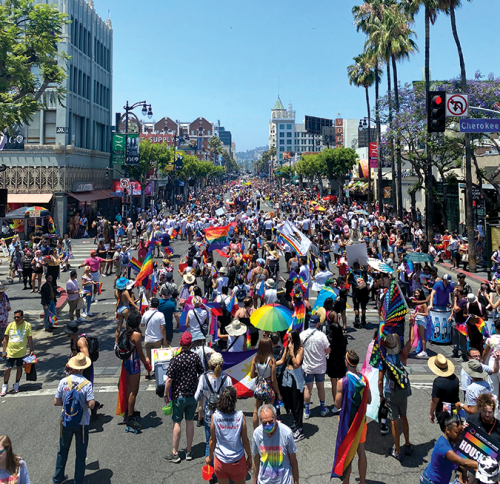 LA Pride featured a variety of events across Los Angeles on June 10-12. While Pride producer Christopher Street West previously partnered with the city of West Hollywood to hold the festival and parade, this year CSW held the festival downtown and took the annual parade through the streets of Hollywood, with entries taking a route down Hollywood Boulevard and Highland Avenue and finishing on Sunset Boulevard.

“It far exceeded my very humble expectations,” Los Angeles City Councilman Mitch O’Farrell, 13th District, said. “We brought the parade back, first time since the late-1970s, back to Hollywood. We try not to have high expectations the first time we do an event, but this was amazing.”

O’Farrell noted that the parade “looked” like Los Angeles, with a diverse crowd of an estimated 125,000 people in attendance and roughly 150 individual parade entries.

“This community has something to offer [to all] society that no other community can provide. We represent every demographic, every single race, color and creed. We represent all of humanity, and all of humanity doesn’t necessarily understand who we are. I think that is what these Pride events are for, and why the response is so supportive,” O’Farrell said.

He also noted that beyond the LGBTQ+ community, there were many allies in attendance, as well.

“I saw a lot of allies there, just out for a good time, because there’s an understanding of what the LGBTQ community goes through. All of these millions of individual journeys that lead us to self-realization, and to let go of the shackles that mainstream society puts on us from the time we’re toddlers. When we can come together and celebrate one another’s liberation and celebrate the fulfillment of living our authentic selves, then it’s a happy day,” O’Farrell added.

The parade also had representatives from LGBTQ-focused entertainment, including the new Peacock series “Queer as Folk,” which stars Johnny Sibilly, also known for his work on HBOMax’s “Hacks.”

“The energy was amazing, especially seeing how telling people ‘happy Pride’ [could] bring out the most joy in them,” Sibilly said. “Riding in the parade with ‘Queer as Folk’ made it even more special because the show truly is our love letter to the community that we love and are so happy to be a part of.”

With the parade in Hollywood again, Sibilly noted a special energy in the air.

“Having it in Hollywood … along the Walk of Fame was crazy and so fun. Growing up a little gay boy, if you would’ve told me I’d be celebrating Pride in the parade in such an iconic place representing such an iconic name like ‘Queer as Folk,’ I wouldn’t have believed you,” Sibilly said.

Many of the parade entries expanded on the idea of inclusivity, even in spaces that aren’t traditionally known for being accepting of the LGBTQ+ community. Hollywood United Methodist Church, which has marched in the parade for decades, showed up with a double-decker bus and a uniting message.

“Inclusive love was radiating from everyone I interacted with,” church member, organizer and life coach Eric Feltes said. “There was such a sense of joy around every corner. It’s important we recognize those who came before us that make it possible for people like me to live proudly. And also, we march to let others know they are seen and celebrated because of who they are.”

Additional activities from CSW over the weekend included a June 11 concert at L.A. State Historic Park with headliner Christina Aguilera, who reunited with Mya to sing “Lady Marmalade.” Among several bedazzled outfits, Aguilera donned one that was decked out in a rainbow pattern.

“Christian Aguilera has always been an advocate for the LGBTQ+ community,” West Hollywood resident and Aguilera fan Jason Aulicino said. “I remember watching the video for ‘Beautiful’ and seeing two men kiss on TV for the first time, and I felt seen. Now, over 20 years later, watching her headline a Pride concert is a full circle moment. In true Xtina fashion, the show was entertaining, emotional, shocking and everything in between. So many fun surprises for her long-time fans.”

The main stage at the festival was free to the public, allowing more people to participate in Pride events.

Holding the festival throughout Los Angeles was also significant, as the city has been a consequential location for the progression of LGBTQ+ rights over the years.

“We have consistently made history in this movement,” O’Farrell said. “From the formation of the Mattachine Society in 1950, the world’s first organized LGBT group, to Cooper Do-nuts [where] drag queens protested downtown [in 1959], to the Black Cat protest, when on the last day of 1966, New Year’s Eve at the stroke of midnight, in a gay bar in Silverlake, two men had the audacity to kiss, and there were undercover cops who arrested them and beat several bar patrons that resulted just over a month later in the first public, organized protest where members of the community were out, proud, took all of the risks, showed their faces to the media. Los Angeles was [also] the site of the first [gay or lesbian] book store, A Different Life.”

“It’s important to pause and remember the roots of Pride. Because the first Pride wasn’t a celebration at all. It was a protest against injustice led by trans women and LGBTQ+ activists, like Marsha P. Johnson and Sylvia Rivera,” U.S. Rep. Adam Schiff (D-Burbank) said, referring to the Stonewall Riots that are credited with kicking off the gay liberation movement.

Some historians have made a connection between the Stonewall Riots and the funeral of singer and actress Judy Garland, which both occurred in the same 24-hour period, June 27-28, 1969.

“The death of Judy Garland, and the mourning for her loss, is what added to the emotions that motivated the Stonewall rioters to protest brutality in 1969,” O’Farrell said. “They poked a hornet’s nest at the worst possible time, and the tensions had built up for years. And Judy Garland played a role. She’s beloved in this community still by people who were born long after she passed away.”

Pride coincided with the centennial of legendary singer Garland’s birth. Garland, in addition to being one of the leading stars of classic Hollywood, is known to be an enduring icon for the gay community. While Garland was heterosexual, she was known to be friendly with her gay audience during her lifetime, with many gay men identifying with her penchant for communicating vulnerability. The Pride flag itself can be likened to her signature song, “Over the Rainbow,” and when gay activities were illegal, the code “friend of Dorothy,” borrowing her character’s name from “The Wizard of Oz,” was used to indicate whether or not someone was homosexual.

“I marched with Dorothy from ‘The Wizard of Oz.’ Now, Dorothy was about 6 foot 4 [inches] tall, but it was Dorothy,” O’Farrell said, referring to a fellow participant in the Pride parade.

On June 10, there was a launch party for a new fragrance named for Garland introduced by her daughter Lorna Luft and Garland’s son, Joey Luft, at the Wilshire Ebell Theatre.

“We were literally welcomed with a yellow carpet lined with poppy bouquets into a museum of Judy’s greatest costumes, movie posters and videos of her best scenes,” model, host and socialite Arisce Wanzer said. “It was the gayest thing I’ll attend all year for sure. I loved every second of it.”

As an unofficial-Pride-adjacent event, Hollywood Forever Cemetery’s Cinespia screening on June 12 was “The Wizard of Oz,” with Lorna Luft introducing the film.

“[The film was] a perfect reminder that there’s no place like home, but also that a home exists for everyone who seeks a better life over the rainbow,” Fred and Jason Arnes, married Los Angeles residents, said.

Schiff, who rode in the parade, summed up the importance of celebrating Pride, especially during a time in which state legislatures across the country are continuing to pass laws that limit the rights of community members.

“Pride is a time to celebrate, uplift and honor our LGBTQ+ friends and neighbors,” Schiff said. “As we celebrate Pride Month this year, let’s recommit to unwavering solidarity with the LGBTQ+ community. That means supporting federal non-discrimination legislation, like the Equality Act, which I’m proud to cosponsor, fighting medical discrimination through legislation like my PrEP Access and Coverage Act, and loudly denouncing bigotry and hatred wherever it may be found.”

“We must not rest until true equality is achieved for all,” Schiff said.