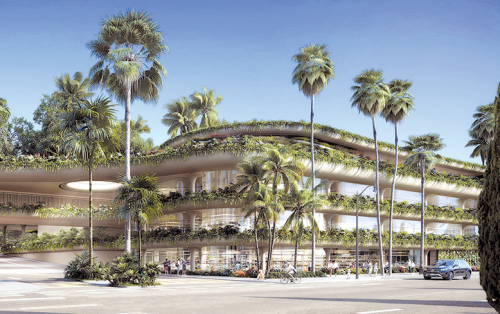 Aman, a lifestyle and hospitality brand, will add a hotel, residences and a club to One Beverly Hills. (rendering courtesy of Aman)

Lifestyle and hospitality brand Aman has joined One Beverly Hills, a 17.5-acre development at the corner of Wilshire and Santa Monica boulevards that was approved by the Beverly Hills City Council in June 2021.

As part of a partnership with Cain International and Alagem Capital, Aman Beverly Hills will be composed of a hotel, residences and a club in the middle of eight acres of botanical gardens. It is expected to open in 2026.

Beverly Hills Chamber of Commerce president and CEO Todd Johnson said the addition of Aman to One Beverly Hills was “huge,” as the company is world-renown with locations in many countries.

“They’re as prestigious as it gets, and to tie in with this project, which is going to be jaw-dropping, is a dot on the ‘i,’” he said. “I think it’ll make this project even that much more of a ‘wow.’”

Johnson said the project is going to make the western entrance to Beverly Hills one of the more unique entrances into a city in the country.

“Coming from the westside into the east in Beverly Hills is going to be spectacular,” he added.

Johnson referenced LVHM’s Cheval Blanc and said there is a lot to be excited about in Beverly Hills. He also said Rodeo Drive has no vacancies, and that Beverly Drive vacancies are down to 12% from 50% during the height of the pandemic.

“We’re getting ready to deal with some type of recession, that’s for sure – or correction, whatever you want to call it – but we’re probably going to be the last to go into it and the first to come out, so we’re lucky,” Johnson said.

“One Beverly Hills is a project that will bring new energy and beauty to our beloved city, and I believe Aman Resorts will be the perfect complement to this world-class destination,” she said. 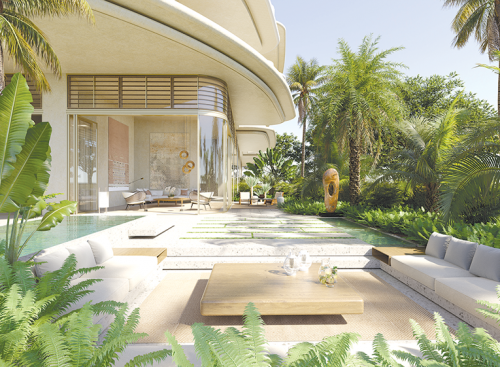 Aman Beverly Hills is expected to open in 2026. (rendering courtesy of Aman)

Representatives of Aman, which was founded in 1988, believe the development will be the centerpiece of a “magnificent urban green space” – similar to the company’s facilities in Bangkok.

“Aman Group’s strategy is to bring the brand’s coveted resort experiences to urban destinations,” Aman chairman and CEO Vlad Doronin said. “This strategic direction has seen us successfully launch the multiple award-winning Aman Tokyo in 2014, and Aman Residences, Tokyo, will follow next year, as well as future urban destinations which feature both hotel and residences – Aman Nai Lert Bangkok, Aman Miami Beach, plus the imminent opening of Aman New York.”

He said joining One Beverly Hills falls in line with the future of the Aman brand.

“The announcement of Aman Beverly Hills further demonstrates our commitment to this strategy and long-term vision,” Doronin said. “Staying true to our DNA and the revered Aman lifestyle, Aman Beverly Hills, nestled in its expansive botanical gardens, captures the legacy and heritage of Aman while connecting our guests with fascinating urban environments. We look forward to delivering another world-class destination on our continued mission to curate hotels and residences of architectural distinction in exceptional locations, with our unparalleled service and experiences.”

Aman operates 34 resorts and hotels in more than 20 countries. Aman Beverly Hills will be the company’s fifth property in the U.S., as it currently operates locations in Wyoming and Utah, and the company is scheduled to open facilities in New York and Miami in the near future.