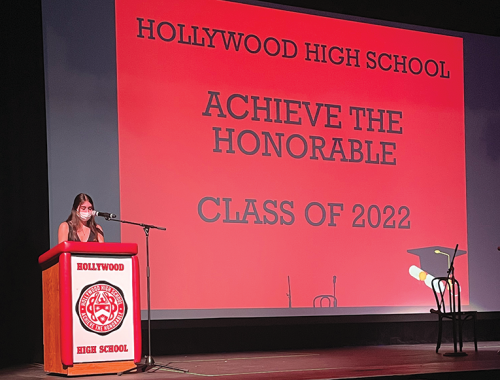 Many of Hollywood High School’s brightest and most talented graduating seniors were recognized on June 2 at the Achieved the Honorable awards ceremony in the school’s auditorium. The evening recognized their achievements in art, music, performing arts, STEM and math. Principal Samuel Dovlatian and head counselor Cynthia Cobb cheered on the honorees.

Hernandez is an Upward Bound program participant. Each student in the program must complete sec­ondary education and enroll and graduate from a two- or four-year college. Other students who com­pleted the program included Enkhsaruul Bathuyag, who is attending the University of California, Santa Barbara in the fall; Ester Curiel, who will attend UCLA; and Dinithi V. Jayakody and Tiyrah V. Miller, who will be attending the University of California. Berkeley.

Bathuyag received the Jack White Scholarship for her dedica­tion in music. The award was pre­sented by White’s daughter, Jill Weinlein, in honor of her father, who graduated from Hollywood High School in 1950. Weinlein, who is the restaurant writer for the Beverly Press and Park Labrea News, said her father was a jazz pianist who performed in many clubs during a lengthy career in music. She added that when her father passed away last year at the age of 89, she wanted to tell the story of how music was instrumen­tal throughout his life. She created the Jack White Scholarship in his honor to recognize music students at Hollywood High School.