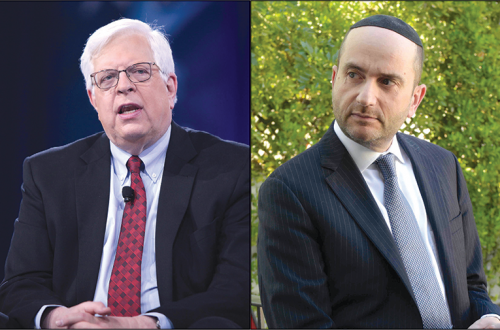 Radio talk show host Dennis Prager and Rabbi Pini Dunner of Young Israel of North Beverly Hills will attempt to answer the age-old question, “Are humans inherently good?” during a debate on June 8 at Beverly Hills Temple of the Arts’ Saban Theatre.

Rabbi David Baron, of Temple of the Arts, will moderate the debate, which is part of a series that seeks to inspire people to think deeper about issues facing society. Baron said he hopes people leave with a better understanding of humanity and human nature.

“As we look at the nature of humanity, we thought this would be a really good thing to discuss in a debate format,” Baron said. “I think it is important, no matter which perspective prevails, that we think about our inherent nature. No matter which side prevails, there are important takeaways for living a good life.”

The conversation between Dunner and Prager began at the end of December when the Algemeiner, a Jewish newspaper based in New York City, published an article by Dunner titled “Being Good is in Our Nature.” Prager read the article and published a rebuttal online. Dunner reiterated his stance that people are inherently good, and Prager invited him to debate the topic. Baron said he has known Prager and Dunner for years, and was happy serve as moderator.

“We are excited to host this kind of event that elevates people’s thought processes into who we are as human beings,” Baron added. “We hope to have a nice turnout.”

Dunner said his belief that people are inherently good is rooted in Judaism.

“My theory is very simple. On the basis of Jewish theology, not withstanding Dennis Prager’s denial of the fact, human beings are conditioned by default to be positive,” he said. “[It is a] defense of Jewish tradition, a defense of humanity. I don’t get why modern concerns about political priorities should change that. It runs counter to Jewish faith and Jewish traditions. To me, it’s the most obvious fact. I have no idea what Dennis is going to say, but I don’t understand having such a negative outlook.”

Dunner said he hopes people will feel good after hearing his viewpoints.

“I hope [people] walk away feeling better about themselves and are more hopeful for the future,” he added. “After this debate, it will be clear that humanity has everything to be hopeful for and positive about.”

Prager said whether people are inherently good or not is a very important topic that deserves exploration.

“Long ago, I realized that how one views human nature is one of the most important questions every one of us must answer. Next to the existence of God, I cannot think of a more important question. Those who believe that human nature is basically good see the world utterly differently from those who do not believe human beings are inherently good,” Prager said. “For example, those who think human nature is basically good raise their children differently: they do not stress character. Why stress character if your child is already good? Another example, those who think people are innately good will not blame people for the evils – murder, muggings, rape, theft, etc. – they commit. They will blame outside forces such as society, poverty, racism and parents.”

Prager said he developed his theory at a young age after seeing stronger children bully others, and also based it on violence throughout history.

“I believe that those who believe that human beings are innately good are willfully naive … they have chosen to be naive,” Prager added. “For whatever reasons, they reject the obvious. ‘People are basically good’ runs as counter to evidence as does ‘men give birth.’”

Prager said he hopes people leave with an understanding that society is not the cause of good or bad within humanity.

“The most important battle in life is with ourselves – our flawed nature – not with society,” he added.

The Great Debate starts at 7 p.m. on June 8. General admission tickets are $25; $10 for students with a valid ID. VIP tickets, which include seating in the front of the orchestra and a special reception beginning at 6 p.m., are available for $100. The Saban Theatre is located at 8440 Wilshire Blvd. For tickets and information, visit thegreatdebate.brownpapertickets.com.