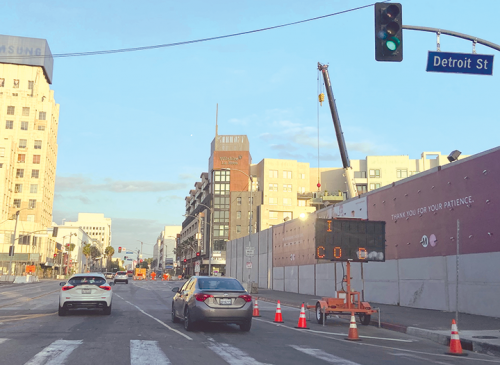 Street surface restoration work on Wilshire Boulevard near La Brea Avenue is expected to conclude on June 27, and will be followed by work on the curbs and gutters. (photo by Edwin Folven)

The Los Angeles County Metropolitan Transportation Authority expects to complete decking removal and street surface restoration work from June 24-27 on Wilshire Boulevard between Highland and La Brea avenues, and will begin installing permanent curbs and gutters on June 27. Wilshire Boulevard will be closed from 9 p.m. on Friday to 6 a.m. on Monday for the final weekend of street restoration work.

Farther west, crews are working underground on appendage structures adjacent to the Wilshire/Fairfax station. A K-rail work zone at the southwest corner of Wilshire Boulevard and Fairfax Avenue will be in place at least through August. Wilshire Boulevard will be reduced to two lanes in each direction between San Diego Way and Spaulding Avenue.

Near Wilshire/Rodeo, ground improvement work is progressing along the tunnel alignment in preparation for the construction of cross passage tunnels underneath the roadway. Fourteen cross passages will be built along the tunnel alignment in Beverly Hills. Work began on June 20 along Lasky Drive and Charleville Boulevard and is anticipated to take approximately 2-4 weeks. Work hours are 8 a.m.-6 p.m., Monday through Friday, but closures in the area will remain in place 24 hours.