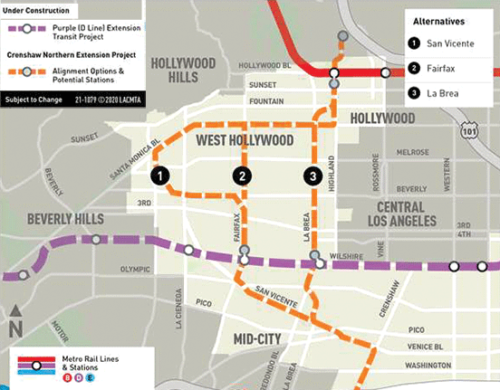 The three possible routes for the Crenshaw Northern Extension all service West Hollywood. (map courtesy of the city of West Hollywood/illustration by Karen Villalpando)

Metro updated the community on the environmental impact report that is underway for the Northern Extension of the Crenshaw/LAX transit line, a project that will ultimately bring rail service to the city of West Hollywood. The two meetings took place on June 16 and June 23. Each was about an hour long and contained the same content from Metro. Participants, which totaled roughly 100 people for each Zoom-based presentation, were encouraged to submit questions, which were answered by the project managers.

The specifics of where and how the line will run through West Hollywood have yet to be finalized. Three different proposals have been made for the potential line. One would run up La Brea Avenue, another up Fairfax Avenue and another would run on both Fairfax and San Vicente avenues. The city of West Hollywood has supported the latter option, which would provide easy access to the popular nightlife spots along Santa Monica and Sunset boulevards. Additionally, the Fairfax-San Vicente route would provide access to Cedars-Sinai Medical Center. Regardless of which route is chosen, the plan is to connect the new transit line to the Metro Red Line at Hollywood Boulevard and Highland Avenue. Each version of the Crenshaw expansion, according to the city of West Hollywood, would create the highest light rail ridership of any current project in the U.S.

Project manager Roger Martin and deputy project manager Alex Moosavi presented information from the scoping period for the project, which has taken place since 2019.

“As we continue our station planning process, we’re looking to get input from the community who know their neighborhoods best,” Moosavi said. “And to do this, we’ve created this station planning story map.”

The map is available for the public to view at metro.net/crenshawnorth, as is all of the other information presented in the meetings. The story map takes viewers through a virtual mockup of where stations would be located along the potential routes.

Moosavi presented graph information that showcased the potential travel times between the Expo station and the Hollywood and Highland station. The La Brea option is the fastest alternative, with only a 13-minute trip between the two locations. With the additional stops necessary for the Fairfax-San Vicente alternative, the time would extend to 20 minutes.

Even after a route is chosen, however, it will still take decades to complete the construction, with the current anticipated date between 2047-2049. One obstacle to completion is funding, and Martin said that funding is always a hurdle with Metro projects. He suggested, based on a question from a community member, that in some cases, and potentially with the Crenshaw/LAX line extension, a project might be completed in phases.

“There’s not a whole lot of money out there, but we’re certainly working on that,” Smith said. “Our pillar projects are moving forward, and we’re very excited to have those projects moving forward, but we’re also excited to coordinate with the opportunities with [the city of] West Hollywood, [the] city of L.A., [to] look at potential funding sources. But one thing we want to do is we also want to get this project to what we call ‘shovel ready.’ So, let’s get it ready, should those additional dollars come down the pipe, we have a project to put out there to build.”

The public expressed some concerns and opinions in regards to which option should ultimately be chosen. Questions highlighted, among other topics, public safety in regards to areas where new stations would be built. Ginny Brideau, the community relations manager for the project, assured residents that public safety was being taken into account.

“Metro has always and will continue working with the community and our government partners to address … customer issues like this,” Brideau said. “We continue to hear, but also at the same time, we have been ruling out programs on a regular basis … adding a sense of security to the stations and the station areas.”

One commenter also asked if there would “100% be a Metro coming to West Hollywood.”

“Once a preferred alternative is selected, project funding will be needed to be in place before 100% confirmation is possible. Continued local support will make this more likely to come to fruition,” Brideau said.

When the EIR has been completed, the Metro Board will make the final decision on which route will be chosen. The EIR is anticipated to be drafted by 2023, and the final EIR will be completed in 2025. No decision was made in conjunction with the meetings. For information on the city of West Hollywood’s involvement in the LAX/Crenshaw line, visit weho.org/metro.