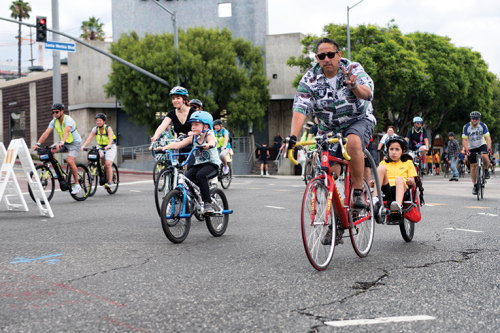 Bicyclists at the August 2019 CicLAvia passed through the intersection of Santa Monica and La Cienega boulevards.

CicLAvia will be returning to Hollywood and West Hollywood in August 2022. On June 6, the West Hollywood City Council approved a measure to help host the event in partnership with the city of Los Angeles.

The free event aims to connect communities across neighborhood and jurisdictional boundaries, closing car traffic for people to bike, walk, skate, roll or even dance through open streets. CicLAvia is a nonprofit that launched in 2008, holding its first event in 2010. West Hollywood first participated in CicLAvia on Aug. 18, 2019, with parts of Santa Monica Boulevard closed to through traffic.

An October 2019 West Hollywood staff report labeled the event “a resounding success,” that furthered CicLAvia’s goal to “catalyze vibrant public spaces, active transportation and good health through car-free streets, engaging with people to transform our relationship with our communities and with each other.”

West Hollywood Chamber of Commerce president and CEO Genevieve Morrill wrote to the council about her support for the city’s renewed partnership in the event.

“We welcomed CicLAvia in 2019, when Metro funded the city of West Hollywood in partnership with the city of Los Angeles to host the event which temporarily closed Santa Monica Boulevard to vehicle traffic and opened it for biking, walking and skating,” Morrill said. “That event was well received by the business community, and the chamber would love to see the event happen once again.”

“I thank the council, and especially Councilmember [Lindsey] Horvath, for bringing this item forward,” resident Kevin Burton said. “I’m especially pleased to see that West Hollywood is working with the city of Los Angeles … with a route that goes through Hollywood and West Hollywood. The last event in 2019 was one of CicLAvia’s most popular ever, attended by tens of thousands of bicyclers, skaters, bikers and runners, and I am fully confident that that will be repeated again a couple months from now. I would encourage all the residents of West Hollywood to join the event whether you’re on a bike, or on foot in running shoes or on skates. And especially, [I encourage] the businesses [to participate]. Think about this, because I spoke with many businesses after the last event who did a roaring business that day.”

In 2019, nine businesses applied for special events permits to participate in CivLAvia, including Shake Shack, MedMen, Rounderbum and Huntees.

“Businesses should take advantage of the waiving of fees to be able to have events out on the sidewalk to interact with all the participants. And I hope to see all of you on the days, including staff participating in the event in August,” Burton added.

“CicLAvia gets people out of their cars and onto bicycles in a safe, fun, ‘carless’ environment,” West Hollywood Mayor Lauren Meister said. “It is an opportunity to imagine our city streets a different way. It’s a great event for kids and adults. I encourage all community members to participate.”

“CicLAvia is like one of those movies where the heroine or hero is transported to a magic land where everything is familiar but nothing is the same,” Councilman John D’Amico said. “Only in reverse, because we don’t land in CicLAvia, CicLAvia lands on us, and for that brief moment there’s a window into a different, possible world.”

The event will be held in August, with a date and more information to be announced soon. For updates and information about CicLAvia, visit ciclavia.org.