CD 13 candidates sound off in forum at the Ebell 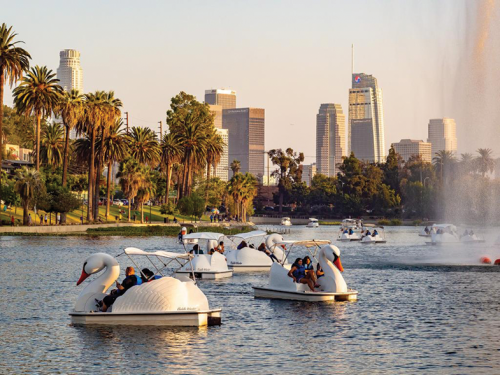 The city’s handling of an encampment at Echo Park Lake was among the more contentious elements of the forum on May 26. (photo courtesy of the Los Angeles Department of Recreation and Parks)

During one of two candidate forums held at the Wilshire Ebell Theater on May 26, the Greater Wilshire and Echo Park neighborhood councils hosted four Los Angeles City Council District 13 candidates and incumbent Mitch O’Farrell, who is seeking re-election.

Held at the Ebell of Los Angeles, the event provided the candidates another opportunity to make their cases prior to the June 7 Primary Election. Ebell president Patty Lombard moderated the event.

The first question Lombard posed was how each candidate planned to retain Los Angeles’ historic neighborhoods while increasing the number of affordable housing units in the city.

“It is a concern,” candidate Steve Johnson said. “People can barely afford their rent.”

He said that, if elected, he would ensure that developers respect the neighborhoods in which they build by giving them incentives to maintain the integrity and culture of those communities.

“When elected, I will definitely make a supply of housing my priority,” Johnson said.

O’Farrell said that, since he took office in 2013, the 13th District has preserved 27 structures and created more than 4,000 units of affordable and permanent supportive housing.

“We have a lot of work to do, but we have plenty of infill development opportunities, and I feel like, moving into the future, we can produce a lot more,” he said. “If all other council districts did what we did, we’d have over 60,000 units of … affordable housing. But, outside of downtown Los Angeles, we produce more than anywhere else.”

“Everyone needs to be able to afford to live in Los Angeles,” she added.

Labor and community organizer Hugo Soto-Martinez said the council district is not currently preserving its history while increasing housing.

“The way we build more affordable units is we have to invest in it,” he said, adding that it is “extremely” expensive to build in Los Angeles.

Albert Corado said the affordable units that are needed already exist, but they’re being “hoarded by corporate landlords.”

“To me, we need to use what is already being hoarded,” he said. “We need to be hostile to corporate landlords and actually open up these units to house people, because we’re not going to build ourselves out of this crisis.”

O’Farrell touted the district’s progress on that effort, which included several Tiny Home Villages. He said May 26 was the one-year anniversary of Echo Park Lake reopening, which was received by applause – and some groans from the audience. The councilman’s office previously said they worked to find housing for each individual who was living at the park for weeks before it was cleared.

“It has been free, safe, clean, secure with zero crime for one year now,” O’Farrell said. “For the better part of a year, my office … [facilitated] 200 units of housing. We bought a building in Echo Park through project Homekey. Over three months, we had the most successful placement operation in the city’s history. We had a place for everyone to go.”

Pynoos said the approach to the Echo Park Lake clean-up was a “failure.” She said the district should be doing more outreach and use service organizations to alleviate the issue, as evidenced by her homeless outreach in Venice.

“That’s what we need to be doing across our communities,” Pynoos said. “Right here in Council District 13, we need to take an all-of-the-above approach.”

“It is true – they’re not at Echo Park Lake,” he said. “But, do you know where they are at? They’re at Windsor Square Library. They’re at Barnsdall Park, and they’ve been spread all across the district. That’s where the homeless community went.”

O’Farrell took issue with what he called misinformation about what happened at Echo Park Lake. For five months prior to the park being cleared, the city conducted daily outreach at the park, and housing was found for every person staying there, he said. The city also established a space for peoples’ belongings to be stored, and those who had animals were allowed to take them to their new housing.

“It was a complete success. We provided a housing solution for everyone there,” O’Farrell said. “When people claim that what we did at Echo Park Lake was a failure, that was just part of the disinformation campaign, fomented by the people who disagreed with our imperative of getting people under a roof and on a path to wellness. And, and I’ll say this, anyone who claims that life at Echo Park Lake was supportive or was a good environment for anyone to live in is ignoring the fact that there were shootings, that there were machete attacks, that there were drug overdoses, that there were four deaths at the park leading up to the days of action, that there was human trafficking of homeless women, that it was an open air meth, fentanyl and heroin market, and it was the source of so much crime to the degree that the park was largely abandoned. Within months, crime has been reduced. The real story is that there’s been no crime because it’s a peaceful, safe place. And children, parents and children have now repopulated the children’s play area. Women feel safe jogging alone, once again. Families are having picnics. It’s now again the place for wedding photos. We have quinceanera celebrations on a regular basis. We’re having school graduations at the park. The Lotus festival is coming back in July because the environment is safe. And it’s clean and it’s secure.”

Soto-Martinez said the council district office needs to have someone exclusively dedicated to handling issues with homelessness, and that the city needs to utilize its unoccupied facilities to house people.

Corado said he would not remove any encampments unless there is permanent supportive housing available. He said several issues lead to homelessness, including low wages and medical debt.

“This whole thing of building a supply of housing – hard structures – to the tune of half a million dollars per unit, that’s crazy town,” Johnson said.

The candidates were also asked about public safety. Corado, whose sister was shot by the Los Angeles Police Department in Silver Lake in 2018, denounced every law enforcement officer in attendance and said the LAPD’s budget should be zero.

“We took to the streets in 2020 to say that we have had enough, and this is what the city gives us,” he said of the department budget. “All these people, with their performative kneels and all this [expletive], and all they give us is an increased police budget.”

Corado was called out by the moderator for using foul language.

To view the forum, visit youtube.com/watch?v=BGlR5Ve3HCA.