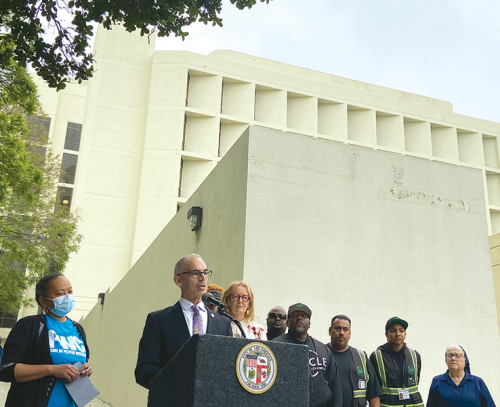 For the past two years, St. Vincent Medical Center has sat vacant near Third and Alvarado streets, only opening briefly in 2020 when the state of California used it as a space for the treatment of COVID-19 patients.

Now, the city of Los Angeles wants the former hospital’s owner, Dr. Patrick Soon-Shiong, to consent to having the building turned into an acute care facility serving homeless individuals suffering from mental illness and addiction. On June 14, Los Angeles City Council President Pro Tempore Mitch O’Farrell joined representatives of organizations addressing homelessness at a press conference outside the medical center, where he called on Soon-Shiong to come to the table for discussions on the proposal. In response to O’Farrell’s advocacy, Soon-Shiong said he is open to a meeting. O’Farrell initiated the process to set up the meeting on June 15, according to the councilman’s Instagram account.

“It’s time for the richest person in Los Angeles, Dr. Patrick Soon-Shiong, to put his vast financial wealth and considerable influence to good use and work with us to reopen St. Vincent as an acute care center for people experiencing homelessness,” said O’Farrell, 13th District. “He has owned this hospital and campus for over two years. Except for a very brief time in 2020, when the state paid Dr. Soon-Shiong $27 million to use the facility as a temporary COVID hospital, the property has sat vacant. Rather than trying to sell it for redevelopment, and refusing to even consider working with us on adaptive reuse or repurposing, I urge Dr. Soon-Shiong to work with our broad coalition of local, county and state leaders to make something happen here to the benefit of all, and especially the most vulnerable in our region.”

O’Farrell said the city has unsuccessfully attempted to reach Soon-Shiong multiple times about the possibility of using the property as a medical facility. The Los Angeles City Council approved two O’Farrell motions in 2020 calling on the city to explore options for potentially purchasing the facility and using it to address the homelessness crisis, and to explore the possibility of working with Soon-Shiong to reopen the facility. He also sent a letter to Soon-Shiong in June 2021 asking for a meeting that went unanswered. O’Farrell said someone with the resources of Soon-Shiong, a billionaire who owns the Los Angeles Times and is known for philanthropy, would be perfect for a public-private partnership that would utilize the former medical center for the public good.

“Several times our CLA’s (chief legislative analyst) office reached out and got nowhere. One of the instructions from September of 2020 was to reach out to Patrick Soon-Shiong to explore the feasibility for the city to enter into some sort of an agreement or a framework to work with the county and other partners to stand this up as an acute care hospital, and they were met with complete silence and they got nowhere,” O’Farrell said.

On June 14, O’Farrell announced that a petition is being circulated at bit.ly/openstvincent asking Soon-Shiong to work with the city on opening the former hospital for people experiencing homelessness. He was joined by several representatives of organizations working with unhoused individuals, including Kerry Morrison, founder of Heart Forward.

“Between 2020 and 2021, the city lost 369 board and care beds, and I ask the owner of this property to work with the city and the county to not only replace the beds lost, but add to the desperately needed inventory,” said Morrison, who formerly worked with city officials to address homelessness in Hollywood. “St. Vincent has the capacity to provide a total of 500 beds for people living with serious mental illness, as well as our growing elderly population, who are otherwise not served by our traditional affordable housing continuum. This is an opportunity to lead by example in showing how the private sector could step up to the plate to collaborate with government partners and not turn a blind eye to the suffering of the unsheltered.”

“The surge in homelessness across Los Angeles presents challenges that can only be solved by public-private partnerships,” added Mark Valentino, CEO of Los Angeles Downtown Medical Center, a 269-bed acute care hospital in Echo Park that dedicates 147 beds for inpatient psychiatric care. “If a facility like St. Vincent were to become operational again, it would have a profound impact on our community. We could relieve stress on our emergency rooms and local hospitals, which have already dwindled in number during the pandemic. Better health care, and access to more resources can lift up the tide for everybody.”

O’Farrell said he is prepared to lobby in Sacramento for state assistance in re-opening the hospital, if Soon-Shiong gives consent.

“We’re sending a message, that time for waiting is over and the time for action is now,” O’Farrell said. “Dr. Patrick Soon-Shiong, it is time to come to the table. Meet with me, meet with us, meet with a state like so many others have who have participated in this collective mission that we’re all on.”