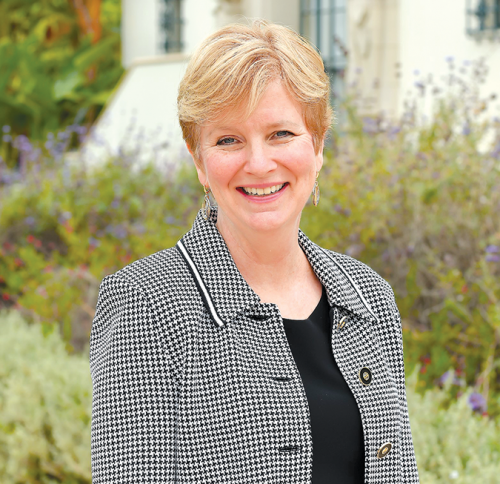 Nancy Hunt-Coffey (photo courtesy of the city of Beverly Hills)

The Beverly Hills City Council on June 21 selected assistant city manager Nancy Hunt-Coffey to fill the vacancy created by the retirement of city manager George Chavez, making her the first woman to fill the position in the city’s history.

City officials announced on June 15 that Chavez would be retiring at the end of the year after 35 years of service to Beverly Hills. Hunt-Coffey’s three-year term will begin Jan. 1, 2023, and she will receive a base salary of $366,021 with benefits.

Councilman Robert Wunderlich said he is confident in Hunt-Coffey’s abilities, and that she is a “fine selection.” He also said the terms of her contract were “very reasonable.”

“She can be a very effective manager,” Wunderlich said. “She can make tough decisions when she has to, but she’s also an empathetic person, and she represents the city well. Putting this in place now allows there to be an orderly transition.”

According to a press release, the city of Beverly Hills hired Hunt-Coffey in 2008 as its assistant director of community services, and she was promoted to director in 2016. In that capacity, she oversaw several city divisions – recreation and parks, library, human services and administrative support. Hunt-Coffey became assistant city manager in 2019.

Prior to working in Beverly Hills, she worked for the city of Glendale and served in several roles, including director of the Glendale Library. Hunt-Coffey helped implement Glendale’s Information Technology Department’s eGovernment program.

She is a graduate of Occidental College and received her master’s degree in information studies from the University of California, Los Angeles.

Councilman Lester Friedman also supported the appointment and said the city is fortunate that it will have six months for Chavez and Hunt-Coffey to work together to ensure a smooth transition.

“Nancy, I think, is a really great asset,” he added.

Councilman John Mirisch said he supported the appointment, but he voted against it because of “specific issues” with her contract.

“I think she definitely deserves a shot,” Mirisch said.

Following the meeting, he elaborated on why he voted against the appointment.

“I feel the process was unnecessarily rushed, with no public input, and I feel it would have been appropriate to have let the new council make the decision about the new city manager and the terms of her contract,” he said.

Vice Mayor Julian Gold said that, generally speaking, it’s a “little bit of a marathon when you hand off the baton,” but in the case of Chavez and Hunt-Coffey, the transition should be seamless.

“I think it will be a real asset to the community going forward,” he said.

Mayor Lili Bosse praised Chavez, saying that he was “beloved and deservedly so.” She said he helped the city worked through a “very challenging time,” and that Chavez and Hunt-Coffey have been a “dream team” while working together.

“I think these next six months will be wonderful,” Bosse added, telling Chavez, “I think you’re leaving us with a bright future and … the best is yet to come.”

Chavez said Hunt-Coffey is prepared to fill the position.

“When I selected her as my assistant city manager in 2019, I was confident this day would come,” Chavez said. “She has been a tremendous partner, colleague and friend. I wish her the very best as our new city manager and will miss working with her every day.”

Hunt-Coffey expressed gratitude for the appointment.

“It’s difficult to put into words what an incredible moment this is for me and my family,” she said. “I have worked in public service for over 30 years, and the employees of this city inspire me each and every day with their dedication and commitment to providing world-class service. I am thankful to the mayor and city council for the trust they have placed in me, and it will be the honor of my lifetime to serve as city manager.”

Hunt-Coffey will be responsible for oversight of the city’s nine departments and working with city staff to implement the goals of the City Council and community, according to the press release.