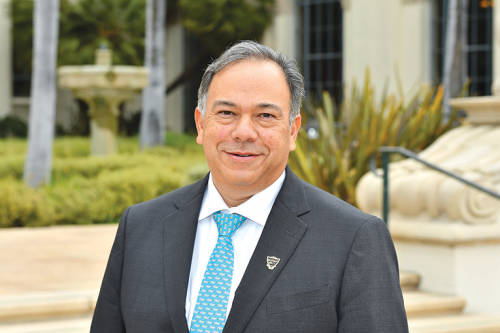 Beverly Hills City Manager George Chavez plans to retire in December. He started working for the city in 1988, and has served as city manager since 2019. (photo courtesy of the city of Beverly Hills)

The city of Beverly Hills announced on June 15 that City Manager George Chavez will retire in December after 35 years of service to the city.

“George Chavez is a beloved treasure,” Beverly Hills Mayor Lili Bosse said. “For more than three decades, he has been the fiber of our community. As city manager, his calm and strong leadership and heartfelt connection to the essence of what makes Beverly Hills so special has always made him a cherished leader. On behalf of the City Council and our entire community, we are deeply grateful to him for being the heart and soul of our community and wish him the very best in his well-deserved retirement.”

Chavez was appointed as city manager in June 2019. He began his career with the city in 1988 as a building inspector, and later worked in multiple positions including assistant director of community development/city building official and director of public works, before being named assistant city manager in 2016. Chavez received the city’s Fred C. Cunningham Award for Distinguished Service in 2017.

The Beverly Hills City Council will discuss the next steps for selecting a new city manager.

“When I began my tenure as city manager in 2019, I could not have predicted the unprecedented challenges that lie just around the corner,” Chavez said. “From civil unrest to the global pandemic and its financial impacts to our city, it was the commitment and resilience of our City Council, employees and community that helped us emerge stronger and ready for the future. I leave the city in very good hands and will treasure the friendships I’ve made for the rest of my life. Thank you, Beverly Hills.”