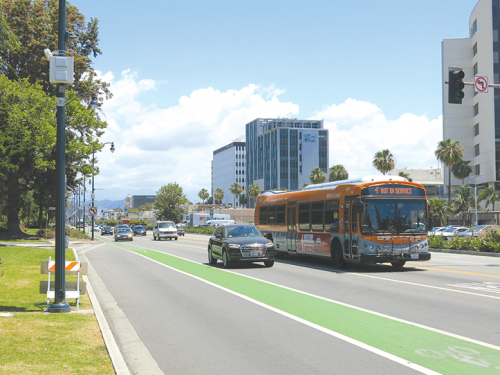 The city of Beverly Hills is continuing its efforts to make the city more bicycle-friendly, as evidenced by the City Council’s June 21 approval of bike lanes and shared lane bicycle markings – or “sharrows” – on Doheny Drive, from Burton Way to Whitworth Drive.

The bike lanes are part of the city’s Complete Streets Plan, which described the Doheny Drive project as “high priority,” according to a staff report. The installation of the on-street, striped bike lanes is expected to occur later this year.

According to a staff report, the project is not expected to impact parking or traffic lanes, but it would connect with bikeways recently installed on Clifton Way, Charleville Boulevard and Gregory Way, and other bike lanes on Burton Way.

“First, this is not about people not being able to use their cars,” Councilman Robert Wunderlich said. “Nobody is saying that cars can’t go on Doheny [or that] cars can’t park on Doheny, or for that matter, the rest of the city. This has never been about [saying] people cannot use cars. What this is about is providing an opportunity for people who choose not to use a car to actually make it safe for them to do so.”

He said city officials regularly discuss maintaining a “village atmosphere” in Beverly Hills and attracting younger families, and that neither of those goals are accomplished by city streets being “race courses.” Wunderlich said residents want quiet streets that are walkable and safe for bicyclists.

“Of course, [this project] is not going to cure that,” he added. “Is it helpful? Yes. Obviously, most people are not going to choose the bicycle instead of being in their cars. But, for everybody who does, that takes a car off the street by choice. It reduces congestion. It reduces the need for parking.”

Wunderlich added that the bike lanes will also reduce speeding and assist in combatting climate change, while improving residents’ physical and mental health.

“But, I do think that the time has come for us to [install] a good north/south route,” Friedman added.

Councilman John Mirisch said the bike lanes will benefit motorists as well, as state law allows bicyclists to occupy an entire lane if they choose to do so.

Vice Mayor Julian Gold said the last time the council reviewed the project in March, concerns were raised about the amount of community engagement the city had done to inform residents about the proposal and bicycle safety.

According to the staff report, city staff has conducted a “robust” educational campaign, including social media posts, presentations and demonstrations, since that meeting.

“You certainly accomplished that goal, as far as I’m concerned,” Gold said.

Mayor Lili Bosse also supported the project and said the city has done a “tremendous” amount of outreach to inform residents of traffic laws as they pertain to bicycles.

“I can’t even remember us doing this level of [outreach], and I’m happy we did,” she added.

I’ve been riding a bike in B Hills for several years. I stay on the sidewalk because drivers are angry and on their phones.