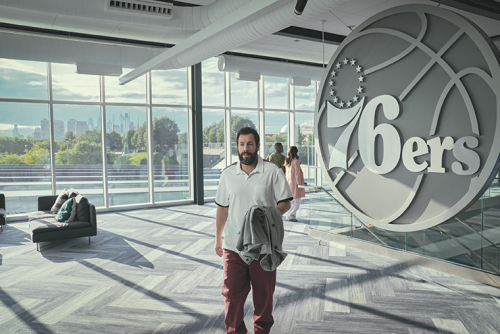 But those differ from his latest film “Hustle,” a feel-good basketball film. No matter. Add it to the Sandler Top 5, and pretty close to the b-ball movies Top 5 too. Shocking as it may seem, “Hustle” is a perfect summer film, both engaging and hopeful.

He doesn’t enjoy the job, which keeps him away from wife Teresa (Queen Latifah) and daughter Alex (Jordan Hull). He almost lands his dream gig as an assistant coach, but new big wig Vince Merrick (Ben Foster) needs the indispensable scout to fix his mistake, find a golden goose before the season starts.

So back on the road he goes. In Spain, he chances upon a pick-up game and encounters Bo Cruz (Utah Jazz power forward Juancho Hernangomez), a towering street player who easily hustles quick cash at the expense of some showboaters. That hustle comes into play later on, and it pays tribute to Sandler’s love of spontaneous games that coalesce on community courts. Just look up the man’s many pick-up appearances amongst locals in Long Island.

Before Bo can shift from concrete to wood flooring, however, he encounters his first obstacle. The brass back home remain unconvinced he’s the next Jordan, fear gambling on an unknown commodity. That doesn’t stop Stanley, who morphs from scout to a coach of one, prepping Bo to stand out.

If a good sports montage elicits no reaction, don’t bother with “Hustle.” This one sports a hefty amount as Bo trains. And they work quite well. Why mess with something “Rocky” proved belongs? Hernangomez’s Bo doesn’t monologue or bare all that’s internal. These quick shots of struggle, frustration, execution, evolution serve as a primary method for moving his story forward.

The pacing, production, even acting from a small army of current and former players (Barkley, O’Neal, Dr. J, Nowitzki) succeed, minus some pandering. Even “Inside the NBA’s” Kenny Smith, in a first as someone other than himself, enjoys a supporting position as sports agent Leon.

As for Sandler, this role plays to his strengths. No Billy Madison voice arrives. Instead, Sandler portrays an unkempt former contender beat down by years of disappointment. Career indifference quashes passion until he finds something – more to the point, someone – to fight for. It’s an effective role, decorated with intermittent, actually funny jokes that lighten the thrills and anxieties that accompany professional sports.

If only the story cared more about Stanley and Bo’s families. Family serves as a promising subplot, especially Alex’s school struggles and growing distance from dad. Something seems to have been left on the cutting board there. Same for Queen Latifah’s T, who lovingly supports Stanley and pushes back against his more basic dilemmas, but she never progresses herself.

What makes “Hustle” unique is a lack of a villain. Sure, Vince hinders Stanley’s career goals, and No. 2 pick Kermit Wilts (Timberwolves shooting guard Anthony Edwards) bullies Bo a few times. But the real enemy lies within.

“It’s you against you,” Stanley says. That’s a central theme, one laced into the film’s fabric. Bo plays informally throughout the film, never for a team with a clear seasonal goal. It’s all about getting to that point.

Perhaps the greatest criticism occurs in the third act, which overflows with plot. Bo must confront his emotional state on the fly, moving directly from one thing to another, without much time to justify the evolution that occurs.

Make no mistake, “Hustle” follows a formula. And a final sequence relies on melodramatics to summarize the fate of various characters a bit too neatly. That’s what a feel-good story requires. Luckily, this one entertainments with the feels and sporting joys that come with the genre.