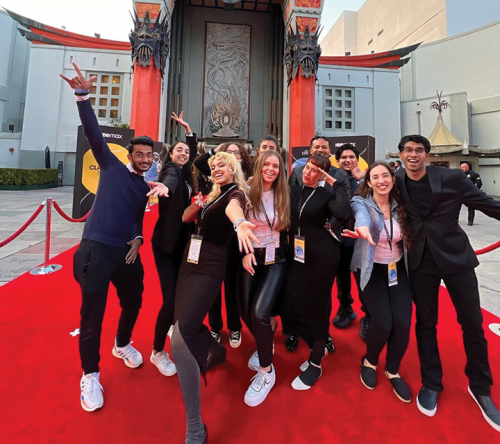 Members of the Academy Gold class of 2021 pose in from of the TCL Chinese Theatre on April 22 at the Turner Classic Movies Film Festival. (photo courtesy of Marlon De Silva)

The Academy of Motion Picture Arts and Sciences has announced commitments from 27 partner com­panies in the sixth year of its Academy Gold Rising program. Gold Rising is an entertainment industry internship and mentorship program for students and young professionals from underrepresent­ed communities. For the first time, the program includes a dedicated focus on visual effects as part of its production track, which concen­trates on below-the-line careers.

“We are incredibly inspired by the participants of Gold Rising. Just as we seek to impart knowledge throughout this program, we are equally eager to learn from these talented individuals who consis­tently bring their unique ideas and insights,” said Academy governor and Education and Outreach Committee chair Wynn P. Thomas. “We welcome this new class and look forward to seeing their ambi­tions unfold as they begin their journeys into our global film com­munity.”

“The Academy’s goal is to evolve constantly in finding new ways to support emerging film­makers within various disciplines. We’re thrilled to add a visual effects focus to our Gold Rising production track program this year, underscoring the importance of emerging technological advances in the art of filmmaking and their invaluable role in creating a story,” said Academy vice president, talent development and inclusion pro­grams Kendra Carter. “We look forward to expanding the breadth of hands-on experiences that will help open doors for our participants to explore their futures in the indus­try, and we thank our incredible partners, Academy members and donors for making this robust pro­gram possible.”

This summer, 100 students (including 14 interns placed within the Academy and the Academy Museum) will participate in Gold Rising. The eight-week program, which concludes with a graduation ceremony on Aug. 6, offers partici­pants networking opportunities with Academy members and indus­try professionals, a variety of panel discussions on every aspect of film­making and career preparation ses­sions.

Partners will sponsor up to three of their interns for the program with a two-day orientation that includes Academy governors, members and other industry speakers, a studio panel, virtual tours of the Academy’s Film Archive, Margaret Herrick Library and Academy Museum of Motion Pictures and a look into the Oscars and Scientific and Technical Awards.

Gold Rising affords top film entertainment, technology, produc­tion services and digital media companies an opportunity to recruit and educate a nationwide pool of diverse talent. To date, there are 465 past Gold Rising program partici­pants. The 2022 class is from 48 colleges and universities and com­prises 82% underrepresented racial/ethnic communities, 59% women, 32% LGBTQ+ and 18% with disability.

Gold Rising, led by program directors Bettina Fisher and Niti Shah, is a part of Academy Gold, a global talent development and inclusion initiative that provides creative individuals of diverse backgrounds with access and resources toward achieving their career pathways in filmmaking. Programs under the Academy Gold umbrella also include Gold Fellowship for Women, the Student Academy Awards and the Academy Nicholl Fellowships in Screenwriting. All past partici­pants and award recipients of these programs become a part of the Gold Alumni Program, which pro­vides networking opportunities, access and career advancement ser­vices, and offers affinity groups for Black and African American, Latinx, Asian American and Pacific Islander, LGBTQ+ and women alumni to network with others who share similar identities, back­grounds and experiences. The pro­gram also tracks participants’ career progression and successes through a database, offering a diverse talent pipeline for the industry.

For more information about the Gold Rising program, visit www.oscars.org/gold-rising.