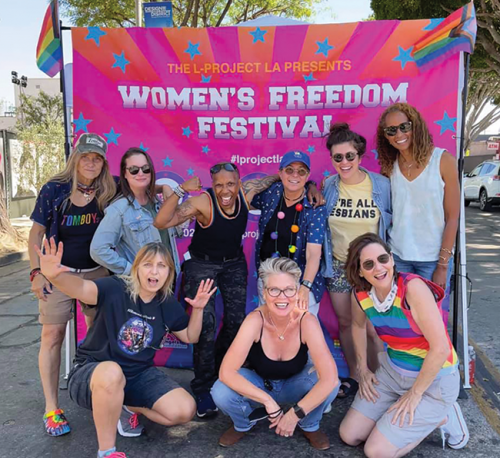 photo courtesy of the L Project

The Women’s Freedom Festival will be held on June 3, featuring LGBTQI+BIPOC and non-binary musicians, comedians, poets and activities.

“We are truly honored that the West Hollywood City Council brought the Women’s Freedom Festival 2022 back to WeHo in a big way,” said Chris Jackson-Baldwin, the L-Project LA founder and WFF creator and producer.

“It’s now more important than ever for all women to come togeth­er in a safe and powerful space,” Madonna Cacciatore, L-Project LA president and WFF co-producer, said. “We will continue to unite for our rights and to celebrate who we are.”

L-Project LA began after the West Hollywood lesbian bar, The Palms, closed down in 2013. With a lack of safe spaces for LGBTQI+BIPOC women, the founders formed a multicultural non-profit 501.c3 organization to promote lesbian art and culture. They created the very first Frida Festival, an art and music festival celebrating the life and legacy of Frida Kahlo. The board is an all-volunteer, multicultural and inter-generational group of LesBiQueerTI spirits with a pas­sion for uplifting others. Its mission statements says that they work to promote, support and inspire LGBTQIA+BIPOC women and non-binary creatives through the arts and technology.

Additional events include the Rainbow Family Day at Plummer Park and the Cherry Bomb’s WFF Night Party on June 4. For infor­mation visit thelproject.org.