‘Who Are You’ is transcendent experience 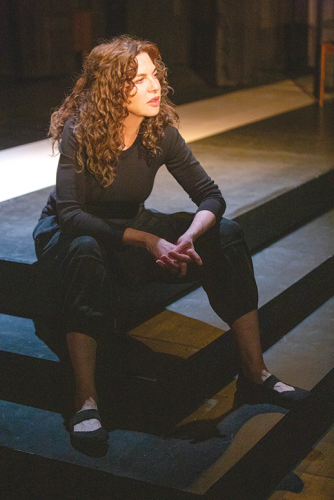 “Who Are You,” the new play presented by the Greenway Arts Alliance and written and performed by Shareen Mitchell, is a transcendent, timely experience.

Mitchell bares her heart on the stage in this one-woman show, using the intimate space to draw the audience into her real-life story. The autobiographical piece covers a harrowing time in Mitchell’s past when she had accrued a large amount of debt and hit a wall in a once-thriving acting career. Stuck in a cycle of babysitting gigs, Mitchell has a mental break and ultimately rediscovers her voice in the form of an entirely new career and industry. Mitchell presents her story in a way that leans heavily into spiritual guidance, drawing laughs from her dives into astrology, meditation and other mystical forms of self-help.

Local residents may know Mitchell from her store Shareen Vintage, which thrived in Los Angeles from 2005-16, starting as a booth at the Melrose Trading Post. The creation of the store, as well as Mitchell’s expansion into outfitting celebrities like Katie Holmes, are covered in the play.

“Who Are You” comes at a pertinent time, telling the true tale of a woman who felt as if she had hit rock bottom and was desperately in need of a new start. Coming out of a pandemic that brought unrivaled economic hardship, “Who Are You” gives hope to anyone who might feel that circumstances beyond their control have taken away their options for success.

Mitchell speaks to her connection to others throughout the piece, as well, highlighting how approaching others through empathy can create opportunity. The play also connects well with the recent tumultuous fallout from the leak of the Supreme Court’s Roe v. Wade reversal, with Mitchell coming up against several male characters, presumedly either real-life or proxies for real life people, that attempt to put her down or curtail her success.

To call Mitchell’s performance a tour de force would be an understatement. At one point on the May 13 opening night show, Mitchell briefly paused as she attempted to recall a line from the mountains of dialogue she recites in the show’s nearly 90-minute runtime.

“I was having such a good time with you guys, I lost my place,” Mitchell said, breaking the fourth wall but somehow not breaking character. The audience laughed heartily, showcasing just how deep into the palm of Mitchell’s hands we were by that point. Throughout the performance, tears, sniffles and even sobs could be heard. Mitchell’s eyes often seemed to be looking right through us, connecting to our souls as she found the tissue between her own experiences and ours.

In many ways, “Who Are You” is the ultimate L.A. story. There aren’t many residents who have survived in the city that can hold claim to having a single job or career in their years here. In a place populated by transients and an entertainment industry that’s always in search of what is fresh and new, the people who survive in Los Angeles are people built and rebuilt in constantly evolving forms.

Since I became an Angeleno myself, more than a decade ago, I have been a tour guide, a real estate leasing consultant, a talent wrangler, a personal assistant, an executive assistant, a political copywriter, a commercial actor, a Postmates driver and a brand ambassador, all on the road to writing for you here, now, in this paper. And that’s skipping more side hustles than I can count.

Mitchell’s story, like so many of ours, is about discovery, rediscovery, perseverance and that small little inkling of hope that keeps driving us forward, believing in ourselves even when no one else does.

I left the theater feeling emotionally spent but somehow surged with possibility. That cool, California air somehow felt a lot clearer, and the idea that the ever-evasive sense of self might be found in America’s most eclectic, disjointed, diverse and overwhelming city was new again. Mitchell and “Who Are You” are must-sees.

The direction by Kate Jopson is stellar, and the show never, at any point, drags or leaves the audience looking to their watches. Ashley Ng accompanies the show on the cello, helping to pull the thematic elements together.

“Who Are You” runs through June 19 at the Greenway Court Theatre, which is located at 544 N. Fairfax Ave. Shows begin at 8 p.m. on Friday and Saturday, and 7 p.m. on Sunday. General admission tickets are $30; $20 for students and seniors. For information and tickets, visit greenwaycourttheatre.org/whoareyou.

Gandelsman presents ‘This is America’ works at Wallis