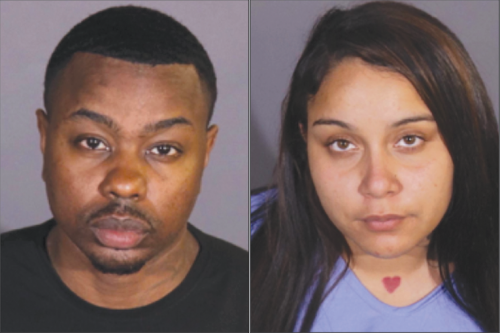 Police released photographs of suspects Ashton Dwight Carter and Teresa Whitaker, who allegedly committed a robbery on May 12 in Hancock Park. Investigators believe the suspects may be responsible for similar crimes. (photo courtesy of the LAPD)

A 38-year-old man and 22-year-old woman have been arrested and charged in connection with a robbery on May 12 in the 300 block of South Muirfield Road in Hancock Park.

Police said the suspects, Ashton Dwight Carter and Teresa Whitaker, both of Los Angeles, followed the female victim from a post office near Third Street and Western Avenue to her home. The victim parked next to the curb in front of her house. As the victim was taking her children out of the back seat of her car, a black BMW pulled up and stopped in the middle of the street, police said. Carter allegedly got out and robbed the victim at gunpoint.

Det. Chris Marsden, with the Los Angeles Police Department’s Robbery-Homicide Division, said the suspect threatened to shoot the children if the victim didn’t give him her watch. The victim complied and the suspect got back in the BMW, which was allegedly driven by Whitaker. The suspects fled. No injuries were reported.

Investigators said footage from security cameras in the post office showed Carter and the victim were there at the same time. The suspect was allegedly paying close attention to the victim, Marsden said.

Police identified the suspects and arrested them on May 17. Detectives served a search warrant at Carter’s residence in Koreatown and found a BMW 535i, which they believe was used in the robbery, an additional BMW and a Mercedes Benz owned by the pair. Investigators also recovered a semi-automatic handgun, jewelry and over $56,000 in cash. The victim’s watch was not located, and Marsden surmised the suspects sold it.

Investigators believe the suspects were involved in similar crimes and are asking any victims to contact the LAPD’s Follow-Home Robbery Task Force at (213)486-6840. During weekends and off-hours, call the LAPD’s hotline at (877)LAPD247.

Beverly Hills City Council meetings will be virtual this week