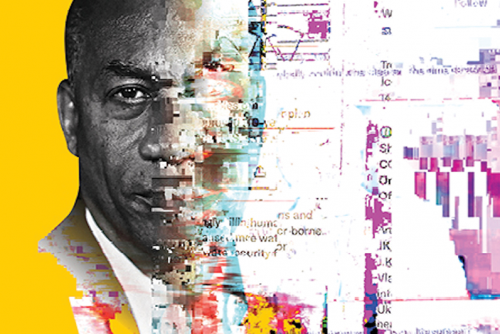 “King Lear” will run May 10 through June 5 at The Wallis’ Bram Goldsmith Theater. (photo courtesy of the Wallis Annenberg Center for the Performing Arts)

The show opens Saturday, May 14, and runs through Sunday, June 5, with previews May 10 through 13, in The Wallis’ Bram Goldsmith Theater.

The production features original music, videos and projections that will transform the theater into a not-too-distant-future United States ravaged by environmental catastrophes.

Morton, following his award-winning, sold-out performance as Dick Gregory in “Turn Me Loose,” returns to The Wallis in the title role of Shakespeare’s tragedy as a man who has brought his country through turmoil, but at what cost? Forced to grapple with violent power struggles and a dysfunctional family, Lear wrestles with the betrayal of his two older daughters who have banished him to the wilderness and his own betrayal of his youngest daughter, exiled for the sin of honesty. Turbulence and fury combine to turn a skilled geopolitical master into a dazed, naked wanderer exposed to the elements.

“By immersing the audience in a future of looming environmental apocalypse, where identity is fluid, and salvation can only be found through self-knowledge, our ‘King Lear’ confronts us with a looming apocalypse, which is the America, indeed the world, we must strive to avoid,” Rubin said.

Audience members are encouraged to wear light-colored clothing for each performance to enhance the production design, which will be projected throughout the entire auditorium.

“John Gould Rubin, [creative producer] Paul Crewes and I formed a very powerful and successful collaboration around ‘Turn Me Loose,’ during which, we began discussing ‘King Lear’ as a play that throws into stark relief two very highly dysfunctional families, a world in which mankind inexorably affects nature, where old age is vulnerable to cruelty and the imperceptive conflict between fatherhood and royalty is an incompatibility that becomes a tempest of madness and desolation,” Morton said. “John, Paul and I are full of expectation, excitement and energy as we begin this next chapter of our partnership.”

Ticket prices are $39-$125 per person. The Wallis Annenberg Center for the Performing Arts is located at 9390 N. Santa Monica Blvd.

Exhibit showcases street art from around the world