‘The Bad Guys’ sports some charm as the story goes everywhere 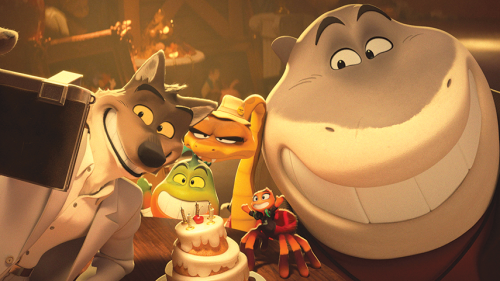 “The Bad Guys” is a fun animated romp sure to keep the kids glued to the screen until the credits. (photo courtesy of Universal Pictures)

Who hasn’t endured the occa­sional (or permanent) fear of sharks, piranhas, snakes, spiders or wolves? The film pantheon runs red with quick examples, from the thrilling “Jaws” to the ridiculous “Eight-Legged Freaks.”

DreamWorks’ latest animated feature exploits that Jungian anxi­ety service of a heist film. At least that’s the pitch. This pixelated world feels like a children’s book, talking animals and humans tra­versing Los Angeles in harmony, save for a crime gang whose fangs, claws and slithering evoke horror from the masses.

So when folks, furry and Homo sapien alike, expect the worst, give ‘em what they want. This beastly band of thieves causes quite a ruckus around L.A., unbothered by public disdain for them. Then Wolf (voiced by Sam Rockwell) saves an old lady from tumbling down some stairs, discovering he might want to be the good guy for a change (his wagging tail betrays his sinister actions).

This revelation arises mid-heist, things go haywire and the gang, now caught, must pretend to under­go a good-guy transformation lest they serve full sentences for their many capers. Beloved philan­thropist Professor Marmalade (Richard Ayoade), an anthropomor­phic guinea, sees these bad guys as a social experiment – transgressors he can reform. Snake (Marc Maron) especially loathes the plan, while Wolf can’t quite figure out how he feels.

The rest of the crew – Tarantula (Awkwafina), Shark (Craig Robinson) and Piranha (Anthony Ramos) – are along for the ride, trading off humorous gags. The real clincher for Wolf is newly elected Gov. Diane Foxington (Zazie Beetz). Why not L.A. mayor? Not sure. Regardless, she proves Wolf’s match, outfoxing him at every turn.

This is enough story to work with. It should be. But then comes a heart-shaped meteorite, a masked culprit and some sci-fi moments to kick off the third act. As the story progresses, the promise of a heist romp moves to the background.

Humans, animals and crime are a great combo. Strange meteorite, no. That’s an oddity too far. Too bad since the premise is quite splendid. Some creatures just exist as crea­tures, others fancy a fine suit. This can only work in an animated world, and the DreamWorks team executes the aesthetic well.

In lieu of Pixar’s brand of cartoon realism, what transpires here is sim­ilar to 2015’s “The Peanuts Movie,” a polished homage to the 2D days. The portrayal of Police Chief Misty Luggins (Alex Borstein) invites comparisons to illustrations across print media. The facial features exaggerate like a walking comics character. 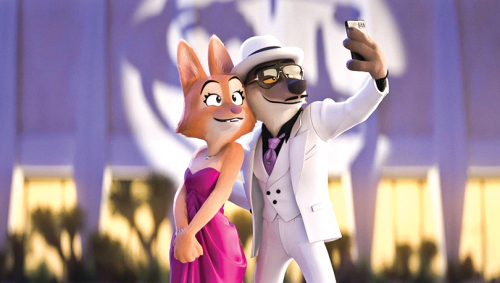 All of those should be tools to create a heist film for kids with just enough winks and throwbacks to appease older viewers. The second part occurs to a degree, thanks to antics from Robinson’s Shark.

That’s not to say the outcome is a complete travesty. It’s a rather watchable film with a lot of clever moments. Actually, enough of those moments almost distract from how odd things get. But certain sections remain random no less, even if the whole experience doesn’t entirely go off the rails.

Despite plot elements that don’t blend, most characters mesh togeth­er nicely. Wolf and the governor enjoy some of their moments, while Snake’s reticence becomes the story’s emotional core. Can people change? Not merely the heisters but a general populace who relies so heavily on stereotypes to categorize what they don’t understand.

Next, there’s Tarantula and Piranha, supporting characters with a couple notable scenes. But Shark. Shark wins all. Everything about him works so well.

“The Bad Guys” is entertaining enough with fun characters and a visually enticing world. Kids will certainly stay glued until the credits. If only the plot’s finer points meld­ed as well as the crisp animation on display.

Thank you for raising awareness about Holocaust denial