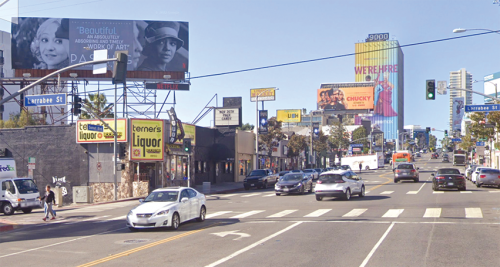 Los Angeles County Sheriff’s Department investigators are searching for a group of four to six male suspects who robbed a man and a woman of luxury watches in West Hollywood on May 8 and used a Rolls Royce as their getaway car.

The robbery occurred at approximately 12:50 p.m. as the victims were seated in a vehicle in a parking lot for the Classic Cat restaurant, 8830 Sunset Blvd. Lt. Bill Moulder, with the West Hollywood Sheriff’s station, said the victims argued with each other prior to the robbery and allegedly caused a disturbance. A caller reported a possibly battery that occurred between the victims, he added.

Before deputies arrived, a black Rolls Royce pulled up in the parking lot and four to six men got out, Moulder said. They approached the victims and forcibly stole a Rolex watch valued at $18,000 and a Michael Kors watch valued at $1,000. The assailants then got back in the Rolls Royce and fled on Sunset Boulevard toward Larrabee Street, where the car went out of view.

“There was some altercation in the parking lot that occurred, some disagreement between the victims, and then the robbery,” Moulder said. “It is unusual.”

The lieutenant said both victims appeared to be under the influence of alcohol and they were initially uncooperative with deputies. He did not know if they had been in the restaurant. One of the victims sustained minor injuries during the robbery, Moulder added.

The suspects were only described as Black male adults wearing dark clothing. Moulder said the robbery fits the pattern of similar recent incidents in which victims wearing expensive watches and jewelry were robbed. Authorities believe multiple gangs from Los Angeles are responsible for the robberies. In some cases, the suspects have driven luxury vehicles and followed victims home from restaurants and nightclubs.

“That’s been happening for a while. We haven’t seen a Rolls Royce yet, but a lot of the perpetrators have been in expensive vehicles,” Moulder added. “The detectives are looking for cameras to see if they can see the license plate or anything that can help them track it down.”

Moulder said in some cases, suspects rent the vehicles they use during crimes, and if a license plate number is identified, authorities could potentially work with rental companies to determine who rented the vehicles. However, sometimes the vehicles are rented online from private parties and are difficult to track.

Authorities with the West Hollywood Sheriff’s Station also ask that witnesses or anyone with information about the robbery call (310)855-8850. Anonymous tips can be made to Crime Stoppers by calling (800)222-TIPS, texting TIPLA plus the information tip to 274637, and visiting crimestoppers.org.

Man dies by suicide after shooting into Hayworth Avenue apartment