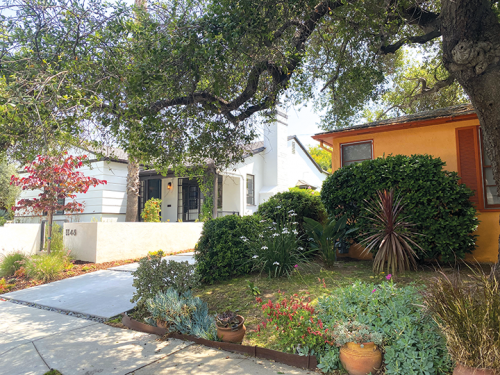 Single-family lots along Greenacre Avenue now have the option to subdivide under California state law SB9. (photo by Rance Collins)

Betty Way and Greenacre Avenue, two of the few remaining streets with entirely single-family dwellings in West Hollywood, were in the conversation at the May 16 West Hollywood City Council meeting, when the council passed an item that codified the California state law SB9.

SB9, which went into effect on Jan. 1, allowed for the subdivision of single-family units into two lots, as long the individual lots meet a minimum requirement of 1,200 square feet. Additionally, the law allows for more dwelling units and additional junior dwelling units of 800 square feet. No lot owner is required to subdivide their lots. Instead, the state law gives owners the option to subdivide their lots, according to Rachel Dimond, senior planner for long range planning for West Hollywood.

The city council item creates perimeters by which the law will be implemented, including basic architectural requirements for how additional units would need to be constructed.

West Hollywood had opposed the state law prior to its passage, with consideration to the small number of single-family lots still within the city’s purview. In total, only 53 units are affected by SB9, and, consequentially, two of the streets that could be most transformed by the law have been in recent West Hollywood Preservation Alliance discussions for potential historic designation.

There was a particular concern, raised by Mayor Lauren Meister, during the May 16 meeting, that West Hollywood’s official adoption of the state law would lead to the overcrowding of streets like Betty Way, which is not only too narrow for street parking but also is made up of small, mostly under 2,400-square-foot lots that could only legally take on a subdivision if second stories were added to existing structures. Public commenters, including residents Steve Martin and Lynn Russell, expressed concern that the city’s recognition of SB9 could eventually lead to vast changes to community integrity.

“SB9 is a developer bill,” Martin said. “[The city has] never been bashful about opposing bad laws.”

Meister echoed many of the residents’ opinions, stating that while the state has mandated this item as law, West Hollywood has often positioned itself as a sanctuary city standing in opposition to federal and state laws. There are several cities throughout the state that have signed a lawsuit objecting to SB9.

“There are times we can go up against the law and protest,” Meister said.

The mayor cited tools that might be within the city’s purview to prevent development on the properties.

“I think that we should be doing environmental studies on historic resources, parking and infrastructure,” Meister said. “I think we should look into the lawsuits and have staff get back to us on the status. I think the idea of amending the historic context study to include these [R1 zoned] areas, particularly Greenacre and Betty Way, makes sense.”

She advocated for tabling the item for the time being and was ultimately the lone council member who did not move the item forward.

While Mayor Pro Tempore Sepi Shyne agreed with much of what Meister and residents had said, she added that SB9 was state law.

“It’s so frustrating that we are getting one-size-fits all mandating from the state,” Shyne said. “But the law is the law. It is what it is.”

Councilwoman Lindsey Horvath said that, while she found it upsetting that the city’s control was taken away by the state mandate in this instance, the council measure would allow the city to exercise what limited control the mandate still allows cities to have.

“What local control we have left, I would like to codify as quickly as possible in the event that someone does come forward with an application,” Horvath said. “Our job is to make sure that when state law is passed, and it must be implemented at the local level, that we do it in the best way possible to protect our community and our local control. I think that’s what is before us, which is why I’m going to support it.”

Councilman John D’Amico suggested that the city look into potential historical context studies for some of the units affected, especially those along Betty Way and Greenacre Avenue, along with site planning options for the city. This idea was supported by the rest of the council.

“Here we are, and this is state law,” Councilman John Erickson said.

Gandelsman presents ‘This is America’ works at Wallis