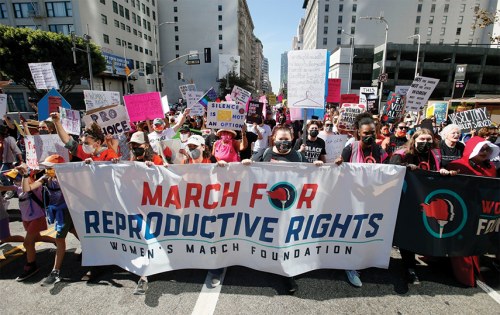 Activists have continued to organize since the Supreme Court’s majority decision draft opinion that would overturn Roe v. Wade was leaked. On May 14 at 10 a.m. at Los Angeles City Hall, Women’s March Los Angeles will host the four-hour “Bans Off Our Bodies” reproductive rights rally along with U.S. Reps. Maxine Waters (D-Torrance) and Karen Bass (D-Los Angeles).

Emiliana Guereca, executive director of the Women’s March Foundation and co-founder of Women’s March LA, said that since the news broke about the draft opinion the response from the community has been overwhelming and included participation from unlikely allies.

“We are facing an access crisis,” Guereca said. “Folks that have not necessarily been on our side are joining us, and whether they believe in abortion or not, what they truly believe is that, in the United States, Roe v. Wade was settled law. When we talk about access to women for reproductive health care to include abortion, your voting preference should not matter. We’re fighting for women across the country to have the same access as California women, to have the same access as New York women. And the fact that we have regressed should alarm all of us, and I think it is alarming all of us.”

If the decision is made final, many women across the country would no longer have access to abortion. Currently, only 16 states and the District of Columbia have laws protecting abortion rights if Roe v. Wade is overturned, according to the Guttmacher Institute.

Guereca said Los Angeles has a unique responsibility in the conversation, and the city has an obligation to support citizens from states that may soon ban abortion rights.

“It is our duty to stand with them,” she said. “It’s our duty, as Californians, to help women in others states have access and advocate at the ballot box. And that is what we need to continue to do. Although we may say, ‘Well, we’re privileged. We’re in Los Angeles. We’re alright.’ Well at what point are we not if we’re not helping our sisters across the country?”

The city of Beverly Hills has taken a stand, with the City Council on May 10 unanimously passing a resolution, brought forth by Councilman John Mirisch, in support of a woman’s right to choose.

“As a woman, this is something emotionally charged for me,” Mayor Lili Bosse said.  “I feel very strongly that we have stood up and spoken out when we’ve seen human rights taken away.  This is a moment in time when we are standing on the shoulders of women who came before us and who come after us. This is something I wholeheartedly support with all my soul.”

“West Hollywood has always been that bastion that people from all over the country and all over the world come to when they need a home, whether it’s because they’re LGBTQ, Russian as we saw in the early formation of the city, Jewish and fleeing antisemitic hate crimes, people of color or women. Because it is a that place, while albeit only 1.8 square miles, we are more than just a city. We are a community that is as vibrant as the rainbow that we fly on our flagpoles. We are a community of people who represent multiple opinions, but at the end of the day, they come out and fight for what’s right.”

Erickson said the decision would be just the first in a series of reversals that could affect other communities.

“For anyone who isn’t a white, cisgendered straight male, this is a five-alarm fire,” he said. “If any city in this country or anyone isn’t worried that something like this can or will affect them, they’re kidding themselves.”

“This is just the tip of the iceberg,” said Nadia Simon, an activist and consultant for California political campaigns. “Our reactions should not be dismissed as alarmism. The Supreme Court will start with women’s rights and continue to roll back other fundamental freedoms. We need to show that we will not sit idly while this institution strips us of our rights under the guise of democracy.”

Simon also participated in a rally and march organized by Rise Up 4 Abortion Rights on May 7 in West Hollywood.

“[It was] an afternoon of much needed solidarity,” Simon said. “[I have been] oscillating between paralyzing despair and pure rage at the idea of losing my rights as a woman, rights we had to fight for 50 years ago that now need to be codified because of the insidious grooming process the conservatives have been engaging in within the Supreme Court to get us to this very moment,” she said.

“Marching and demanding to uphold my rights as a woman feels like my singular option for direct action, but [it] is also a way to help me channel this ongoing paralysis our generation is facing at the thought of reverting to darker times.”

In addition to his role on the West Hollywood City Council, Erickson works with Planned Parenthood Los Angeles.

“They have been preparing for this for quite some time and their health centers remain open, and they will always stand on the frontlines and support patients from all walks of life and from anyone in this country that need to access reproductive health care and abortion,” Erickson said.

According to Erickson, a woman who traveled from Texas to receive help from Planned Parenthood in Los Angeles said that she had never thought much about women’s health issues until it affected her.

Guereca said she has been encouraged by the response throughout the nation.

“I know that spontaneously folks have been organizing across the country. All of these folks are self-organizing. This is self-organizing volunteer work because we are in a crisis for women,” Guereca said.

She also said that a crowd gathering in Los Angeles on May 14 will send an important message to the Supreme Court.

For information about attending the Women’s March LA rally or to volunteer, visit womensmarchaction.com/may14-rally.