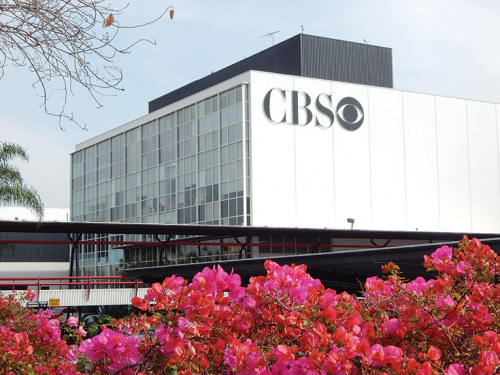 Television City’s iconic main structures will be protected under an agreement between the property owner and preservationists. (photo by Edwin Folven)

The owner of Television City in the Fairfax District has come to an agreement with the Los Angeles Conservancy on a plan that will preserve the historic studio as upgrades to the 25-acre property are made in the coming years.

Hackman Capital Partners, which purchased the property from CBS in 2019, launched a plan in March 2021 to build additional studio sound stages and production facilities at the site. The plan is currently going through the city’s entitlement process and an environmental impact report is being created.

The conservancy wanted to make sure any changes at the property do not jeopardize historic components of the former CBS Television City, which was designed by the architecture firm Pereira & Luckman and opened in 1952. Prior to the sale of the property, the conservancy worked with CBS in 2018 to get portions of the studio designated as a Los Angeles historic-cultural monument, including the main building, its glass façade and the covered canopy near the parking lot. The new agreement between the conservancy and Hackman Capital Partners ensures those elements will be preserved as development moves forward.

“Television City is one of the great Hollywood studio lots,” said Michael Hackman, founder and CEO of Hackman Capital Partners. “We are committed to investing in this important historic resource while ensuring it remains a robust job creator and world-class studio for decades to come. We are pleased to have worked with the conservancy to find a win-win solution that preserves and celebrates the historic building while putting forth a plan that enhances TVC’s production operations and expands its production capacity.”

“Throughout this process, our goal has been to preserve Television City and ensure its iconic stature and presence along Beverly Boulevard remains while still allowing for change and new, surrounding development,” added Linda Dishman, president and CEO of the Los Angeles Conservancy. “We are grateful to Hackman Capital Partners for not only listening, but working hard with us to achieve a good balance.”

Adrian Scott Fine, senior director of advocacy for the Los Angeles Conservancy, added that the conservancy and Hackman Capital Partners worked together for approximately one year on the agreement. Because Hackman Capital Partners is seeking permission to build on the site and will announce specific building plans later, the agreement is conceptual. Fine said it guarantees that the historic parts of the property remain in-tact while giving the owners flexibility with adding new structures.

“It’s hard to say what the project will look like, but what [the plan] does is create a framework for how new development will occur,” he said. “It’s a balance of allowing the new development and preserving the historic buildings.”

Over the years, Television City has been home to many famous television shows, including “The Carol Burnett Show,” “All in the Family” and “The Price Is Right,” and more recently, “The Late Late Show with James Corden.”

The plan for development, which is known as TVC 2050, calls for 15 new modern sound stages, as well as production offices and support facilities. The goal is to modernize the facility to enable more productions to stay in Los Angeles, said Zach Sokoloff, senior vice president of Hackman Capital Partners.

“The plan is a significant investment in one of our city’s most identifiable institutions to modernize and expand production facility availability on site. It reaffirms and celebrates Los Angeles’ commitment to being the entertainment capital of the world,” Sokoloff added. “This is a really monumental achievement for the project and we are incredibly proud of our partnership with the conservancy.”