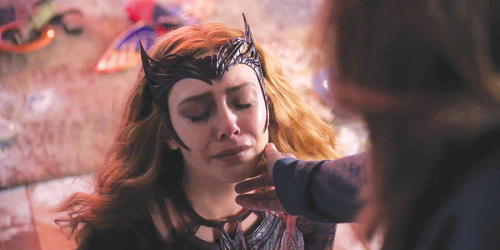 “Doctor Strange in the Multiverse of Madness” rekindles some tired analogies with the Scarlet Witch (Elizabeth Olsen). (photo courtesy of Marvel Studios)

In the 19th century, hysteria was a diagnosis “used by the male-dominated medical profession to reinforce the notion that females are emotionally unstable,” Psychology Today’s Robert Bartholomew writes. Hysteria has a long gendered history.

The Hollywood diagnosis for hysteria is often cringy. Someone, often a woman, experiences an uncontrollable episode easily, perhaps comically, ended with a slap. This kind of slap dates back to the silent era. It’s such a common trope that Woody slaps Buzz to snap him out of his metaphysical hysteria upon learning he is, in fact, just a toy.

In horror, hysteria cranks up to 11. Take 1976’s “Carrie.” The title character (Sissy Spacek) goes through a change amongst her peers in a locker, emotionally undone in the process. Unsure what else to do, a P.E. teacher slaps Carrie, successfully calming her down.

Hysteria intensifies as her body evolves even more. She develops telekinetic powers she can’t control, at first slaying bullies after a prom prank before that power undoes her completely.

Enter Marvel Studios’ latest offering, “Doctor Strange in the Multiverse of Madness.” Rather quickly, Wanda Maximoff, or the Scarlet Witch (Elizabeth Olsen), is revealed to be the film’s villain, a shocking revelation considering what happened in the “WandaVision” series last year.

“Madness” might make headlines for portraying a horror-adjacent story, but its connection to horror cinema is problematic, namely its embraces of an age-old trope of the genre: the hysterical woman.

Her motivations are simple. In “WandaVision,” she lost control of her powers, rewriting reality for a small town, creating two sons in the process. To correct this, she must bid them farewell, but the series concludes while her darker side, the Scarlet Witch, reads the dark magic text the Darkhold in search of a way to find her children once more.

Come “Madness,” she believes her children exist somewhere in the multiverse. All she must do is capture America Chavez (Xochitl Gomez), who can traverse any dimension at will. One catch: she needs to kill America to harness powers.

While Wanda premieres as a villain in “Avengers: Age of Ultron,” she never kills. Here, she goes complete scorched earth rather quickly, dispatching many sorcerers alongside Doctor Strange (Benedict Cumberbatch) protecting America. The former Avenger has no trouble killing any in her path in hopes of becoming a mother once more. 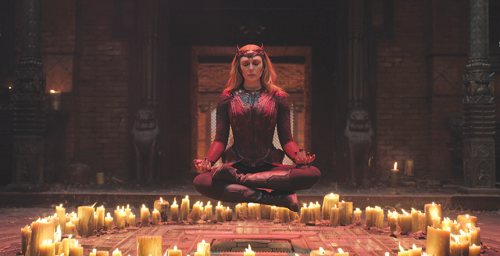 Dark influences make the Scarlet Witch (Elizabeth Olsen) the villain in “Doctor Strange in the Multiverse of Madness.” (photo courtesy of Marvel Studios)

Superhero media sure loves exaggeration. This is the genre that normalized walking around in a completely star-spangled super suit sans cape, after all. So Wanda is emotionally troubled, and superpowers add greater stakes to what might’ve been resolved with proper therapy.

Even worse, the root of the word “hysteric” actually dates back to ancient Greek, translating to “of the womb” or simply “womb.” So hysteria originated in the womb, at least once upon a time in a backwards land. That sits uncomfortably next to Wanda’s primary goal: find her kids.

In the comics, the Scarlet Witch is one of many female characters unable to balance emotions and incredible powers. The loss of her children actually results in most of the world’s mutants losing their special abilities (she was really mad at her dad, Magneto, at the time).

“WandaVision” seemed to reimagine the character’s print history, while “Madness” takes a shortcut to up the film’s stakes and present a villain audiences will invest in. Regardless of why, the outcome is cheap. It often is.

HBO has a couple contemporary variants. The first one arrived in 2016 with a robot named Delores (Evan Rachel Wood) in “Westworld.” Originally created for human pleasure – sex, murder fantasies and even more heinous things as well – she eventually fights back, leading an uprising. All justifiable until she takes things too far.

Easily the most popular hysterical woman slowly emerges across eight seasons of “Game of Thrones.” Daenerys Targaryen (Emilia Clarke) rises from a powerless object of desire to liberator. Then she watches her friend executed and burns the majority of King’s Landing, the desired capital so many seek to rule from, to the ground with her last surviving dragon. Again, cheap.

Wanda shares the most in common with her, though the hysterical woman frequently displays a central characteristic: righteous rage. Delores and Daenerys are right in their cause, wrong in how they reach it. Wanda presents the problem to Stephen Strange early on. She breaks the rules and is feared, while he does the same to great praise. “That doesn’t seem fair,” she concludes.

She’s right. Strange manipulated reality in “Spider-Man: No Way Home” so some kids undone by Spidey’s unmasking can enjoy private lives once more. Wanda wants something stripped from her when Thanos (Josh Brolin) murdered her partner Vision (Paul Bettany) in “Avengers: Infinity War.”

By design, the hysterical woman must be framed as a villain to some degree, and that’s easy to see in “Madness.” She kills and overtakes the body of her counterpart in another version of Earth. This is hardly to the degree of Loki (Tom Hiddleston) – he led an alien invasion that killed countless humans in the first “Avengers” film – who has since been redeemed in his own series. But the evil turn feels tired, a betrayal, following redemption in her own miniseries.

Like most hysterical women, she must die when someone finally slaps her back into reality in the form of a showdown against America. Mind you, Wanda isn’t dead. She redeems herself, destroys the Darkhold and all others across the multiverse.

She’ll be back – the Darkhold blamed for her choices – but “Doctor Strange in the Multiverse of Madness” thematically requires her sacrifice. The implication is quite frustrating: she’s punished for her trauma, her abnormality. Her powers are too great, and she can’t control them. Perhaps Hollywood enjoys exploiting women’s suffering too much.