Murder near Melrose remains a mystery 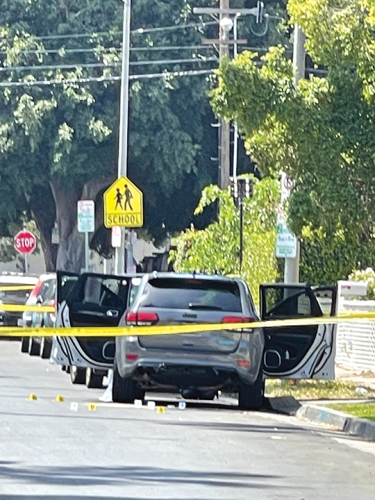 Police cordoned off the vehicle in which the victim’s body was found during the investigation on April 30. (photo courtesy of Melrose Action)

Authorities have released few details about their investigation into the murder of a man whose body was found inside a vehicle on April 30 in the 700 block of North Orange Grove Avenue.

The Los Angeles Department of Medical-Examiner Coroner identified the victim as Dtravion Turner, 22, of Bowling Green, Ky. The suspect died of a gunshot to the head, and the death is being investigated as a homicide, but no further information about a motive was available. Officers from the Wilshire Division received an anonymous call around 6:20 a.m. and found the victim unresponsive in a gray Jeep SUV parked near the curb on Orange Grove Avenue, just north of Melrose Avenue.

Detective Sean Kinchla, with the Los Angeles Police Department’s West Bureau Homicide Unit, said investigators have interviewed people who live in the neighborhood and are searching for camera footage. He said some people reported hearing two gunshots at approximately 10 p.m. on April 29, but nobody called police.

Anyone with information is urged to call West Bureau Homicide investigators at (213)382-9470. During weekends and off-hours, call the LAPD’s hotline at (877)LAPD247.

Suspect from Texas charged in murder of man walking dog