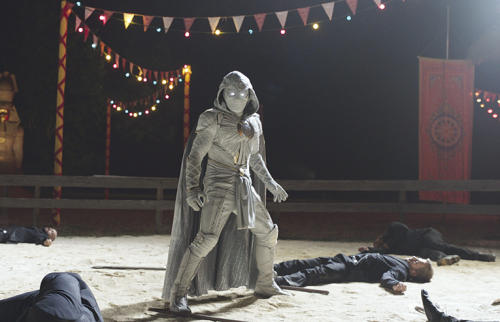 “Moon Knight” is a refreshing new series from Marvel that defies the basic structuring that makes some superhero stories bland. (photo courtesy of Courtesy of Disney+)

Look, they can’t all compete with “WandaVision,” but Marvel Studios’ latest series “Moon Knight” takes enough cues from its small-screen kin to avoid the superhero genre’s over-the-top norm. Come that inevitable epic finale, this one stays the course, more interested in its thematic resolve, unconcerned with what might visually satisfy more viewers.

Avid comics readers know supes fiction enjoys more diverse narrative direction than most of their cinematic cousins are willing to display. Tragically, the roller-coaster effect seems like the only appropriate path for such fare. But Marvel can still traverse new ground across a host of six-episode series.

Enter “Moon Knight,” which amplifies the age-old conflict surrounding identity. Steven Grant (Oscar Isaac) lives a simple life in London, obsessively studying the culture of ancient Egypt. But a meager job at a museum gift shop and general insecurities disguise something quite amiss inside Steven.

He often loses time, awaking in different cities, unaware how he got there. Normally, he merely heads home seemingly unbothered by such instances until a chase ensues as followers of the mysterious Arthur Harrow (Ethan Hawke throwing his voice for just the right flair) attempt to recover something from Steven.

Without giving too much away, Steven learns he has a unique connection to Khonshu (brilliantly voiced by F. Murray Abraham), the Egyptian god of the moon, and a caped figure called Moon Knight. To help sort things out, Layla El-Faouly (May Calamawy) works with Steven, as the pair embark on, well, a psychedelic mystery through ancient myths for answers.

And arrive they do. “Moon Knight” is the most standalone Marvel series yet. It relies on no previous viewing, though an appreciation for Indiana Jones and Egyptian mythology would certainly improve the experience. 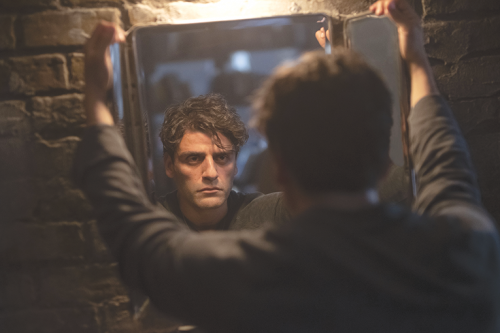 Oscar Isaac portrays Steven Grant, whose life is shrouded in mystery in “Moon Knight.” (photo courtesy of Courtesy of Disney+)

“Moon Knight” unravels like a commercial version of the FX series “Legion,” based on the son of telekinetic mutant leader Professor X. That one’s a surrealist head trip. This Disney+ original, which finished season one last week, explores hidden identities in a much lighter capacity.

That might sound frustrating, perhaps even like a cop out, but it’s not. It a primary part of the series’ thesis: this is not a typical superhero romp. Characters matter more than a satisfying action sequence. It’s refreshing.

To do otherwise merely reaffirms, regurgitates. That’s not the goal here. Again, “safely” is the key term. “WandaVision” might’ve traversed new ground too, but it ended similar to other MCU fare. Same here. It’s always a showdown brimming with fan service, incredible fight choreography and a couple shocking things as well.

The number of superhero stories that offer original ideas is rather modest: “WandaVision,” HBO’s “Watchmen,” maybe “The Batman’s” heavy detective vibes (don’t even try to bring any DCEU into this). “Moon Knight” fits snuggly with that short list, and there’s a clear reason why – they follow the comics’ lead.

Several moments are pulled directly from specific comic book panels. More than that though, things get weird in ways comics have for years. This one doubles – perhaps triples – down on the superhero theme of identity. Why does the protagonist lose time? Wait, is he in a psychiatric hospital? Is that a giant god and goddess over there?

Things get wild because comics can often be wild. And hopefully that keeps happening. That might be to the dismay of other critics who wish for these stories to go away or follow certain basic structuring guidelines (the list, of course, goes on). Not this critic. This one wants more of that weird.

Seafood and lunar eclipse at BALEEN