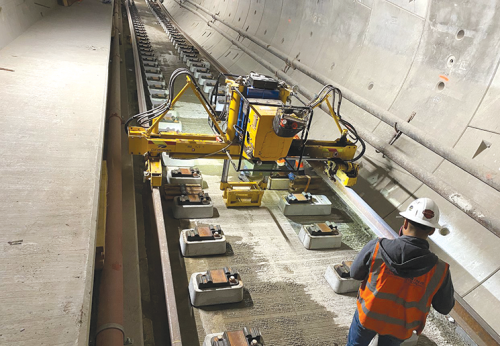 Crews are laying tracks in the tunnels along the Purple Line Extension subway project. (photo courtesy of Metro)

Learn about work on the first and second sections of the Purple Line Extension subway project during Metro’s next lunchtime webinar on Wednesday, June 1, from noon-1 p.m. The webinar will focus on construction on all three sections of the project between the Wilshire/Western and Wil-shire/Rodeo stations. To view the meeting via Zoom, visit zoom.us/j/96626476708. To view the meeting live, visit facebook.com/purplelineext. To listen to the meeting, call (669)900-9128 and enter the webinar ID 966 2647 6708. A recording of the meeting will be posted at metro.net and on Facebook for those who wish to view it later.

Street restoration and decking removal work will be on hiatus for the Memorial Day weekend, but will resume on June 1 and continue through July 11. Wilshire Boulevard will remain open between Highland and La Brea avenues.

Near Wilshire/Fairfax, crews are working underground at the subway station and in appendage structures, which are rooms and passageways adjacent to the station. Wilshire Boulevard will be reduced to two lanes in each direction between San Diego Way and Spaulding Avenue through September. A K-rail work zone will remain at the southwest corner of Wilshire Boulevard and Fairfax Avenue.

Wilshire Boulevard may also be intermittently reduced to one or two lanes in each direction between San Vicente and La Cienega boulevards, near the Wilshire/La Cienega subway station.

Utility work is anticipated to begin in June on permanent electrical power lines to the future Wilshire/Rodeo station. In the days leading up to the work, lane closures are anticipated on Wilshire Boulevard between El Camino and Crescent drives. Ground improvement work to be completed in preparation for construction of cross passage tunnels is anticipated to begin soon. The work will occur at 14 locations along the tunnel alignment and Metro will issue notices with details about each closure prior to the start of work.

Piling work for the future Westwood/UCLA station is ongoing in the middle of Wilshire Boulevard between Veteran Avenue and Westwood Boulevard through July 22. Lane reductions may be needed in the area. Through May 27, Metro is continuing geotechnical instrumentation near Wilshire Boulevard and Selby Avenue in Westwood.