Man dies by suicide after shooting into Hayworth Avenue apartment 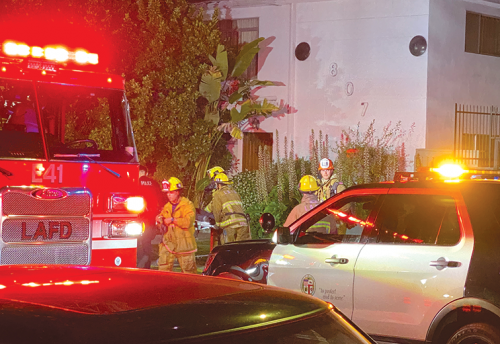 Authorities are investigating a shooting on May 11 in the 800 block of North Hayworth Avenue that allegedly occurred during a domestic violence incident.

Police received a call at 11:35 p.m. about shots fired into an occupied dwelling, and found a man at the scene suffering from a gunshot wound to the head, Los Angeles Police Department spokeswoman Annie Hernandez said. Officers determined that the man with the gunshot wound allegedly went to the apartment building and confronted a woman who lives there, fired shots into her apartment and then shot himself, Hernandez added.

“The suspect did not strike the victim,” she said. “He committed suicide. He was pronounced dead at the hospital.”

Hernandez said the man who died was 34 years old. The Los Angeles County Office of Medical Examiner-Coroner confirmed the death is under investigation but released no further information.