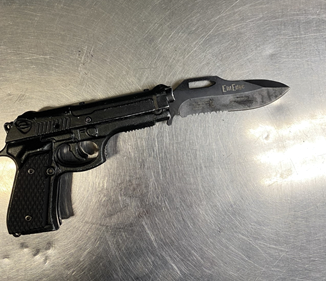 Police released a photograph of the replica firearm with a knife blade that was recovered from the alleged suspect. (photo courtesy of the LAPD)

Comedian Dave Chappelle was attacked onstage by an assailant on May 3 at the Hollywood Bowl. The Los Angeles Police Department did not name Chappelle as the victim, but said that around 10:40 p.m., a comedian performing at the Hollywood Bowl was tackled by a male audience member, Isaiah Lee, 21, near the end of the performance.

Police said Lee was brandishing a replica handgun, which contained a knife blade, and security personnel and bystanders who witnessed the incident pulled Lee off of the victim. Lee was detained while LAPD Hollywood Division officers responded. Lee was then transported to a hospital for medical treatment for injuries sustained during the altercation. After receiving medical treatment, Lee was booked for felony assault with a deadly weapon.

Chappelle was criticized in 2021 for his Netflix special “David Chappelle: Live in Real Life,” which included jokes about the transgender community. The program prompted employee protests at Netflix, but it was not removed.

Suspect from Texas charged in murder of man walking dog