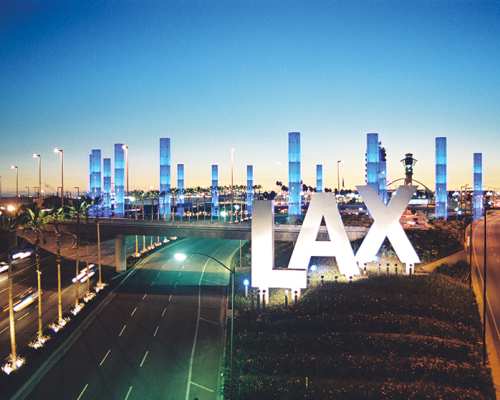 The iconic pylons at Los Angeles International Airport were lit in turquoise in conjunction with a program to combat lung cancer. (photo courtesy of the American Lung Association in California)

The American Lung Association in California worked with city government and private businesses throughout Los Angeles to illuminate city buildings and landmarks in turquoise through May 14 to raise awareness about lung cancer and educate people about lifesaving screening.

“Lung cancer remains the leading cause of cancer deaths among both women and men in our state. In 2022 alone, it is estimated that 17,450 California residents will be diagnosed with lung cancer,” said Frances Mojica, executive director of the American Lung Association in California-Los Angeles. “But there is hope. The five-year survival rate – the percentage of people who are still alive five years after being diagnosed – increased by a dramatic 33% in the past 10 years. Raising awareness and funds for lung cancer is more important than ever. We encourage our community to get involved in ‘Turquoise Takeover.’”

Mojica said lung cancer screening is key to early diagnosis, which saves lives. Only 5.7% of those at high risk have been screened, including only 1% in California. The association also released a new public service announcement educating people who smoke or used to smoke about the low-dose CT scan that can detect lung cancer in the early stages, when the disease is more curable.