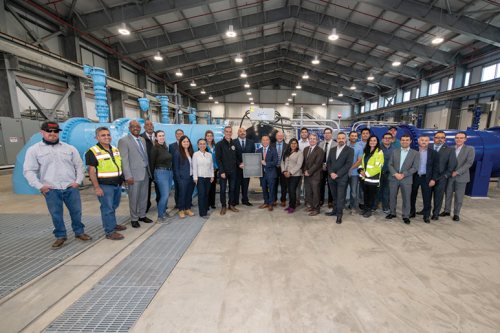 The facility is LADWP’s second UV disinfection plant and the last in LADWP’s complex network of water treatment processes at the Los Angeles Aqueduct Filtration Plant.

“In Los Angeles, we are taking action to become more resilient and prepared for the drought years that are happening with greater frequency due to climate change,” Garcetti said. “This state-of-the-art facility will ensure we continue delivering high quality water as our state experiences a third consecutive year of drought. Los Angeles is ready to tackle this challenge head-on thanks to the tireless work and leadership of our Department of Water and Power.”

“Not many people think about the hard work that goes into getting high quality tap water into their home,” Council President Pro Tempore Mitch O’Farrell, 13th District, said. “Today, we get a chance to see part of that process, up close and personal. LADWP continues to demonstrate its dedication to ensuring the highest water quality for Angelenos with projects like this L.A. Reservoir Ultraviolet Disinfection Plant.”

The plant can treat up to 650 million gallons of water per day, which is enough to fill the Los Angeles Memorial Coliseum more than twice over.

The second UV facility supplements the existing Dr. Pankaj Parekh Ultraviolet Disinfection Facility, which treats water with ultraviolet light that has already undergone several treatments before it enters the Los Angeles Reservoir. The new UV plant treats the water with ultraviolet light once again, at the outlet of the Los Angeles Reservoir, before it enters L.A.’s water distribution pipes that transport water to homes and businesses.

The approximately $123-million project was funded by two Safe Drinking Water State Revolving Fund awards. Based on the bond rate available at the time of project inception, the estimated total interest savings for LADWP ratepayers, is close to $16.5 million.