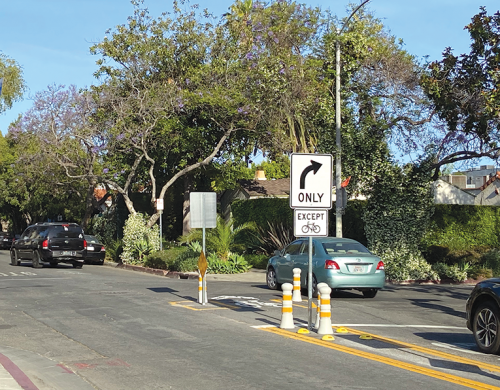 Motorists have been ignoring a right turn-only sign at Willoughby Avenue and Ogden Drive, driving around it and continuing eastbound. (photo by Edwin Folven)

A roundabout, curb extensions and traffic diverter have been installed on Willoughby Avenue in the Melrose District in an effort to determine the best ways to make the residential neighborhood safer by preventing cut-through traffic.

The street fixtures were installed in late April on a stretch of Willoughby east of Fairfax Avenue and will be in place through early August. The project is a joint collaboration between the city of West Hollywood, Los Angeles Department of Transportation and the office of Los Angeles City Councilman Paul Koretz, 5th District. The Los Angeles-West Hollywood border runs down the middle of Willoughby Avenue in the area.

”They are using residential streets to cut through,” Cheung said. “We know from cell phone data where they are coming from and where they are going to.”

Cheung said drivers use residential streets like Willoughby Avenue to circumvent traffic on larger streets such as Santa Monica Boulevard and Melrose Avenue. The goal of the traffic calming measures is to make it less desirable to use the smaller residential street to travel east or west.

The new streetscape elements on Willoughby Avenue include a traffic diverter at Ogden Drive, which includes a stop sign and a sign indicating only right turns are permitted. The curb extensions are located at Willoughby and Spaulding avenues, and the roundabout is at Willoughby and Curson avenues. Both of those intersections are also controlled by four-way stop signs.

The traffic diverter at Ogden Drive has achieved mixed results, Cheung conceded. Many motorists have been driving around the sign in the middle of the street indicating they are supposed to turn left, and keep going straight. During a 10-minute period on the evening of May 9, only one out of 24 cars made a right turn, while the other drivers disobeyed the sign and continued eastbound. The blatant flaunting of traffic laws has caused concern among some people who live in the neighborhood.

“They are diverting around the diversion and it’s causing a safety issue,” said Peter Nichols, co-founder of Melrose Action. “This is a very active neighborhood. There are families with kids, people walking their dogs, people taking a stroll and riding bicycles, and this is an accident waiting to happen. I am a proponent of slowing down the roll of people, because they are in too much of a hurry. But every action seeds reaction. Those who turn right and still want to go east just turn onto Waring, and it just diverts traffic onto a different residential street.”

Cheung said West Hollywood transportation officials will work with the LADOT to address the issue of people disobeying the right turn-only sign, and possible solutions include citations. However, he said the point is not to cite and punish people, but to educate drivers and change their behavior.

“The fact that people are ignoring this and driving around it really shows how people take Willoughby to heart as a cut-through street,” he added. “We will work with the city of L.A. to see how we want to move to the next phase.”

LADOT spokesman Colin Sweeney said traffic diverters are a relatively new method of reducing traffic on residential streets, and he confirmed that the measures in place on Willoughby Avenue may be moved to other locations or removed entirely if they are found to be ineffective or problematic.

“This is one of those interventions where we put in the treatment, observe its effect and make a decision from there,” he said.

The traffic calming measures are part of West Hollywood Pedestrian and Bicycle Mobility Plan. Cheung stressed that the measures are temporary, and the city wants input from residents and motorists. People can submit comments by visiting weho.org/city-government/city-departments/planning-and-development-services/long-range-planning/mobility-planning/willoughby-vista-gardner-street-design-project. Virtual workshops on the project are also planned on June 7 from 5:30-7 p.m., and June 11, from 9:30-11 a.m. Links to the meetings will be added soon to the city’s website. People can also email comments to Cheung at bcheung@weho.org.

Koretz said he favors measures that promote safety for everyone, and is open to making changes based on what is best for the community.

“They are working collaboratively to make changes to improve upon the traffic safety measures already in place at the intersection of Willoughby and Ogden,” Koretz said. “We are ready to assist in whatever ways are needed to support this effort.”

West Hollywood City Hall is back in business