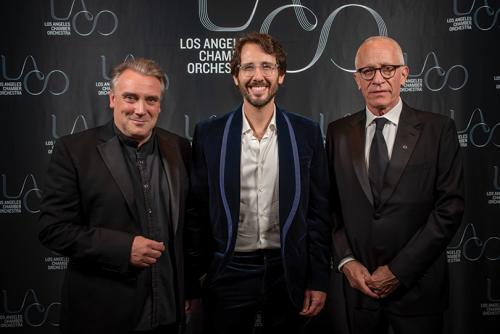 The black-tie event included a cocktail reception, dinner and a live musical program featuring LACO Music Director Jaime Martín conducting the Orchestra in Copland’s beloved classic, “Appalachian Spring,” as well as the world premiere of a medley of two works from film scores by Howard, “The Wedding” from “Wyatt Earp” and “A Man and His Beasts Redux,” a suite from the “Fantastic Beasts” films. Multi-platinum recording artist Josh Groban introduced Howard at the gala, which included a virtual auction and paddle pledge and raised $675,000 to benefit the concert performances and educational initiatives of the Los Angeles Chamber Orchestra. Among the auction items were a private meet and greet with Howard and tour of his Santa Monica studio for the winner and three guests.

“It was an inspiring evening,” LACO Executive Director Ben Cadwallader said. “The beautiful Beverly Wilshire was the perfect place to host LACO’s first gala in nearly three years. It was truly a celebration of artistry, philanthropy and friendship. We were stunned by the magnitude of generosity on display from LACO’s family of supporters, ensuring that this orchestra’s future is brighter than ever. James Newton Howard’s long and rich history recording with so many LACO musicians made him the perfect honoree for this year’s gala. His score, premiered alongside Copland’s Appalachian Spring, was a stirring tribute to the artistry of the evening’s second honoree: the stellar musicians of LACO.”

“The music you played tonight was written for 85 musicians and singers. There were 13 of you on stage and it sounded absolutely incredible,” Howard said, following the night’s performances. “The two directors who hired me to write the music you just heard are here with their wives – Larry Kasdan and David Yates. You have both given me the best musical opportunities imaginable. Thank you for giving me the best job in the world.”

He also thanked his colleague Jeff Atmajian for his “brilliance in reducing the orchestrations from 100 musicians to 13.”

“As a native Angeleno, I’ve long admired LACO’s extraordinary reputation in the music community,” Groban said,  “I’m here tonight to speak about a man who has set the musical mood for some of our most beloved and popular films and television series. Many of you have undoubtedly been moved to tears or joy, felt chills or thrills from his music scores throughout his illustrious career. James started out as a session musician for artists like Diana Ross and Ringo Starr, but his big break came when he auditioned as a keyboardist for Elton John and went on to tour with him throughout the ‘70s and ‘80s.  At that point every major recording artist was eager to work with him – Crosby, Stills and Nash; Melissa Manchester; Neil Diamond; Chaka Khan; Cher; Chicago; Rod Steward; Barbra Streisand…and more recently, well, me.”

“Several musicians in LACO have played on my scores for, dare I say, more than 20 years. My presence here tonight is consistent with LACO’s beginning in 1968 as an outlet for LA’s top session musicians. I like to think the reverse is also true … that recording a movie score can be challenging and satisfying and an opportunity for orchestral musicians to hone new skill sets. I am so grateful that I can be here with all of you tonight. If ever there was a time to make and listen to beautiful music, it is now,” Howard added.