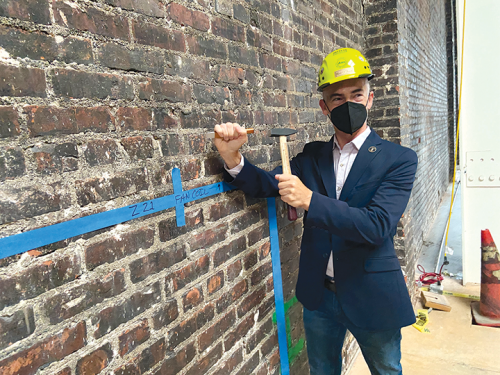 Council President Pro Tempore Mitch O’Farrell used a hammer and chisel to mark the start of renovations at the Hollywood Western Building. (photo by Edwin Folven)

O’Farrell joined the building’s owner, Samir Srivastava, of ABS Properties Inc., and members of the project team on May 23 for a ceremony marking the start of renovations on the building, which will contain 79 units for seniors. ABS Properties hopes to complete the project, which will also include ground-floor retail and commercial space, in 18 months. The units will be studio apartments designated for seniors whose incomes are 30%-50% of the area median income. Monthly rents are expected to be in the $500 range, Srivastava said.

The new senior housing adds to the more than 4,000 units of affordable housing that have been completed, are under construction or have been approved in the 13th District since O’Farrell took office in 2013.

“Preserving our cultural history and adding to our supply of affordable housing aren’t mutually exclusive goals. Results speak louder than words. In the 13th District, we are doing the hard work of producing housing, including adaptive reuse projects like this one to convert an existing architecturally significant building into housing,” O’Farrell said. “I’m proud to have helped secure the financing and land-use approvals for this project, which will put a roof over the heads of our most vulnerable Angelenos and breathe new life into this architectural masterpiece.”

“The adaptive reuse of the Hollywood Western Building comes at an important time for our community and city,” Srivastava added. “When families are losing hope of ever finding stable housing choices, we are building affordable units, while preserving a historic building that reminds us that our architectural past is worth saving. In doing so, we are sending a crystal clear message to the city that Hollywood believes in building housing that allows for all backgrounds and incomes to live in harmony.” 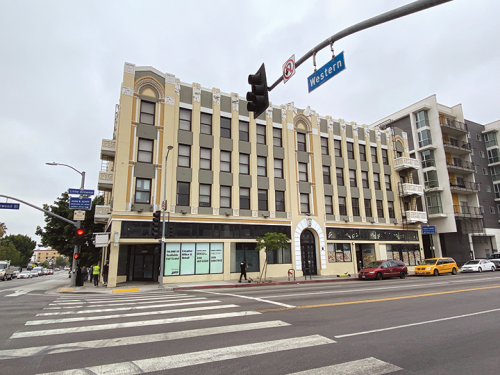 The interior of the historic Hollywood Western Building will be converted into 79 units of senior housing. (photo by Edwin Folven)

Officially called the Hollywood Western Building, the four-story structure is often referred to as the Mayer Building because it was built in 1928 by film mogul Louis B. Mayer. It became the first home of the Motion Picture Association of America and Central Casting, before being converted in the 1960s and 1970s into rehearsal space and recording studios. The band Guns N’ Roses formerly recorded at the site. The building was damaged in the 1994 Northridge earthquake and was vacant for years until being redeveloped into office space. It recently housed field offices for O’Farrell and U.S. Rep. Adam Schiff (D-Burbank).

The Hollywood Western Building was designated as a Los Angeles historic-cultural monument in 1988 and was added to the National Register of Historic Places in 2015, said Lambert Giessinger, historic preservation architect with the Los Angeles City Planning Department’s Office of Historic Resources. The building was designated for being part of the early development of Hollywood, and is recognized as an example of art deco design by noted architect S. Charles Lee, Giessinger added.

“This is a great example of how adaptive reuse and historic preservation can work together,” Giessinger said. “I’m thankful to make this project a reality and ensure this historic resource is enjoyed by future generations of Angelenos.”

Srivastava said the renovation project was financed with tax credits and bonds. He thanked O’Farrell for supporting the project and helping to usher it through the city approval process.

“Mitch has been a strong supporter of this vision, and we wouldn’t be here without his help,” Srivastava said. “I can’t even start to explain, but he has helped with many, many of the obstacles that came along. That’s why I’m very proud to stand here with Mitch to help get this project started.”

O’Farrell also highlighted the importance of having support services onsite for seniors. The building owner is partnering with The People Concern, a nonprofit that provides services for vulnerable populations including seniors, unhoused individuals and people suffering from mental health and substance abuse issues.

“We’re thrilled to see this project come online and be the service provider,” said Josh Hertz, director of relations with The People Concern. “Permanent supportive housing is a much needed resource in Hollywood and we’re in full support of the adaptive reuse model to meet our needs.”

Fire in Hollywood remains under investigation

How/When will they be taking applications?

Not sure when they are taking applications, contact Councilman O’Farrell’s office at 213-473-7013, as they may have that information. Thank you.