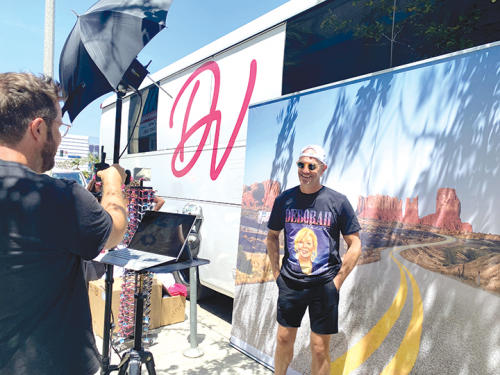 For its second season, the main characters on “Hacks,” Deborah Vance (Jean Smart) and Ava Daniels (Hannah Einbinder), will be hitting the road as Vance, a legendary comic, plays venues across the country. Filmed primarily at Paramount Studios in Los Angeles, the series’ second season premieres May 12 on HBOMax. To help promote the show, a Deborah Vance tour bus has popped up all over L.A. this week.

“We’re giving away some free swag,” said Julia Galvin, director of marketing at the Syndicate, a marketing and production agency that put together the promotion. “We’ve got Deborah Vance tour T-shirts, we’ve got ‘Hacks’ hats, we’ve got Deborah’s own Diet Coke machine that is on her bus that we’ve brought here and also a little photo moment here where you can take a picture and put yourself in the key art.”

Galvin is referring to the backdrop used in billboard advertisements for the show that can be seen all over the city.

The bus set up camp in various locations, including the Original Farmers Market, the Dolby Theater and Rocco’s in West Hollywood.

“The bus is here because we know that the heart of the show originated in L.A., with [the character] Ava being from L.A. and moving to Vegas to hang out with Deborah and work for her, and with a lot of the team who’s been working on the show being out in L.A., this is a great spot to do it,” Galvin said.

“At its heart, L.A. is where the show lives,” general manager of the Syndicate Graham Rothenberg said. “It is a focal point of the industry where a lot of the show takes place.”

For Blaise Preau, vice president of multicultural marketing at HBO/HBOMax, the series represents an attitude that is intrinsic to L.A. culture.

“It’s one of the queerest shows on TV, and we’re very proud of that,” Preau said. “We have a very diverse cast, and that includes both as characters as they’re written and the actors that portray them. We love the diversity of the show, and we want to celebrate that within the community that the majority of the cast are actually a part of.”