Fire in Hollywood remains under investigation 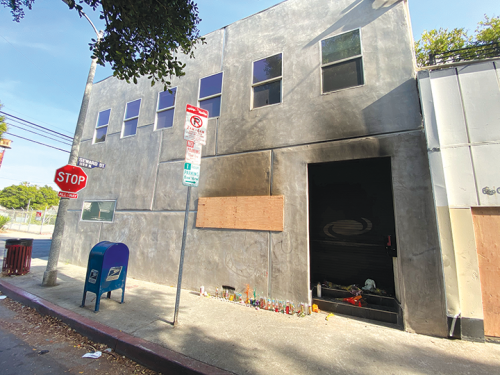 Flowers and candles were placed outside a building on Lexington Avenue in Hollywood that housed recording studios after a body was found inside following a fire on May 19. (photo by Edwin Folven)

The Los Angeles police and fire departments are investigating a blaze on May 19 in which a man died in a two-story building at 6600 W. Lexington Ave. that had been converted into recording studios.

LAFD Capt. Erik Scott said the fire was reported at 5:42 p.m. and firefighters found smoke coming from the building, which is located at the southwest corner of Lexington Avenue and Seward Street. Most of the people who were inside self-evacuated, but firefighters found the deceased man after extinguishing the flames and searching the building. Scott said the building’s interior was divided into small individual studios, and materials used to sound-proof the spaces made it difficult to extinguish the flames.

“It was very challenging fire, to navigate and crawl through a building with zero-visibility,” Scott said. “The studios had sound-deafening insulation, and the same materials that excelled in keeping sound in also excelled in keeping the fire burning. It took us over an hour to fully extinguish [the fire]. The building was very compartmentalized.”

Scott said the fire originated in a first-floor unit. He wasn’t certain whether the victim’s body was found in that unit or elsewhere in the building. The Los Angeles County Department of Medical Examiner-Coroner has not released the victim’s name pending the outcome of the investigation. Media reports identified the victim as Nathan Avery Edwards, 26, who recorded, produced and mixed music under the name Avery Drift.

Two other people were treated at the scene for smoke inhalation but declined to be hospitalized, Scott added. Aimee Osbourne, daughter of Ozzy Osbourne, was inside the building when the fire erupted and escaped unharmed, according to media reports. Scott could not confirm the names of any of the people who were present inside the building at the time of the fire, or how many people evacuated.

Anyone with knowledge about the illegal and unpermitted use of the building is encouraged to report violations by visiting ladbsservices2.lacity.org/onlineservices/?service=rav.