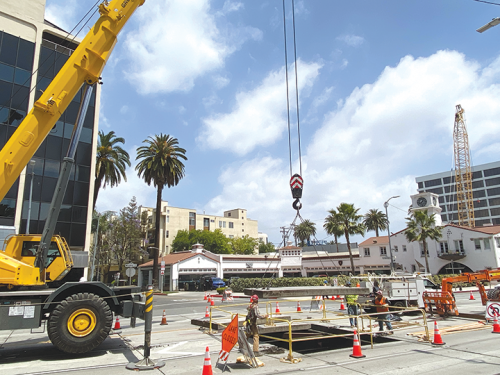 The Los Angeles County Metropolitan Transportation Authority is holding a webinar on Tuesday, May 10, from noon-1 p.m. on decking for section three (Westwood area) of the Purple Line Extension subway project. To attend the meeting via Zoom, visit zoom.us/j/96626476708. To view the meeting live, visit facebook.com/purplelineext. To listen to the meeting, call (669)900-9128 and enter the webinar ID 966 2647 6708.

Work is occurring at many locations along the subway project from Wilshire/Western to Westwood/VA Hospital. In the Miracle Mile, weekend closures on Wilshire Boulevard will occur between Highland and La Brea avenues through July 11 (excluding the Memorial Day and Fourth of July weekends). The closures are necessary while crews restore the Wilshire Boulevard street surface. Wilshire Boulevard will be closed from 9 p.m. on Friday to 6 a.m. on Monday each weekend. Traffic will be diverted north to Sixth Street to bypass the closure. For information, visit mcknbr0fgxh5k0f2vx078zts2980.pub.sfmc-content.com/1guuusythcw/w2hnxunrso4.

A construction zone in the center of Wilshire Boulevard near Masselin Avenue will be in place through the beginning of 2024. Crews will be conducting cross passage work between twin subway tunnels near the Wilshire/Fairfax station. Wilshire Boulevard has been reduced to two lanes in each direction around the work zone between Ridgely Drive and Curson Avenue.

Just west of the Wilshire/Fairfax station, crews will intermittently close an alley between the former Johnie’s coffee shop building and the 99 Cents Only Stores building through September. Beginning in May, crews may also implement weekend directional closures at Wilshire/Fairfax to support ongoing work at the subway station and appendage structures, which are rooms and passageways that connect to the main station. Eastbound traffic will be detoured onto La Cienega or San Vicente boulevards, then south to Olympic Boulevard to avoid the closures.

New traffic configurations are also anticipated in May near the Wilshire/La Cienega subway station. Through traffic for northbound Gale Drive may be intermittently restored in mid-May. However, southbound Gale Drive will remain closed north of Wilshire Boulevard. Two lanes will be open in each direction most of the time on Wilshire Boulevard between La Cienega and San Vicente boulevards, but traffic may periodically be reduced to one lane in each direction.

Lane closures are also anticipated on Wilshire Boulevard between El Camino and Crescent drives in Beverly Hills. Utility work is anticipated to begin in June on permanent electrical power lines to the future Wilshire/Rodeo station, where construction will be ongoing through 2024. Ground improvement work in preparation for the construction of cross passage tunnels is also anticipated to begin in late-May. Fourteen locations along the tunnel alignment will require lane and sidewalk closures for the work. Metro will issue future notices detailing the closures at each location.

In Westwood, piling is ongoing on Wilshire Boulevard near Gayley Avenue for the future Westwood/UCLA station. Metro crews will install dewatering wells on Wilshire Boulevard between Malcolm and Selby avenues to support maintenance for the tunnel boring machines. The work will be completed in stages through June 30, and notices on community impacts will be updated as work progresses.

For questions and concerns about the Purple Line Extension project, call the 24-hour project hotline at (213)922-6934, email the project team at purplelineext@metro.net or visit metro.net.