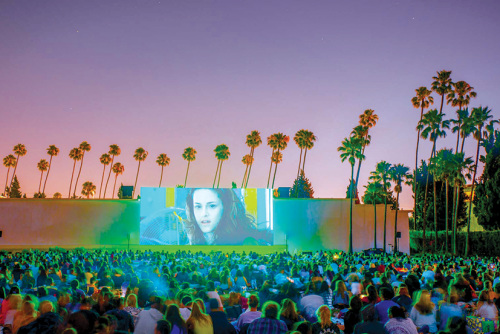 Cinespia, the Los Angeles cine­matic experience presented by Amazon Studios, is returning for its 21st season at the iconic Hollywood Forever Cemetery starting Memorial Day weekend, kicking off a jam-packed summer of pro­gramming with “Mean Girls” (May 28), “Back to the Future” (May 29) and “American Psycho” (June 4). Additionally, “Twilight” will be shown on June 3 at Los Angeles State Historic Park.

“We’re beyond excited to be back at Hollywood Forever and kick off our 21st season over Memorial Day Weekend with two screenings,” Cinespia founder John Wyatt said.

“We’re looking forward to seeing our patrons this summer under the stars celebrating cinema at some of L.A.’s most iconic venues,” Cinespia creative director Alia Penner said.

The beer and wine bar and conces­sion stands are returning along with the free photo booth that will feature scenes inspired by films. Cinespia DJs will spin onsite before and after the films.

For information and to pur­chase tickets, visit cinespia.org.

The Broad announces programs in conjunction with new exhibitions

‘Come From Away’ returns to the Ahmanson